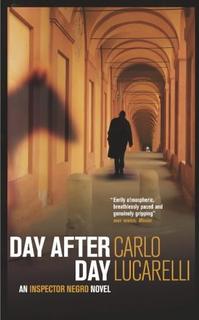 The first of Carlo Lucarelli's noir thrillers to be translated into English was Almost Blue (not to be confused with the amazing Japanese "underground" novel Almost Transparent Blue, by Ryu Murakami). Almost Blue (available from City Lights Press, in their City Lights Noir series, in the U.S.) is entertaining but a bit sketchy. The story relies heavily on the surreal interior monologues of the killer, nicknamed the Iguana by the police, and a blind "witness" who is the only one who can recognize the killer, by his voice, since the Iguana changes his appearance at will. The surreal, even magic realist, quality of the narrative threatens to overwhelm the police procedural (featuring detective Grazia Negro and the team that her boss is putting together in Bologna), and the sketchiest part of the book is indeed the procedural/detective portion. But the evocation of the city of Bologna is wonderful, and some elements of the plot are fascinating. The denoument is a bit abrupt, though. The second in the series, Day After Day (recently translated and available in the U.K. from Harvill Press. 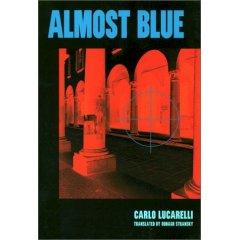 Day After Day is more satisfying in several ways. Although the plot is almost a carbon copy of Almost Blue (substituting a cold contract killer for the impassioned serial killer of the earlier book), the narrative's poetic qualities (particularly in the narratives of this book's witness and killer) are less surreal, more pertinent to the other narrative, that of Ispettore Negro and the police. And the resolution, though firmly in the formula of the series, is more fully realized in the second book. The only drawback (and the only reason I would not recommend readers to simply begin with the second book and ignore the first) is that Bologna is a more fully realized site for the plot in Almost Blue. So I recommend the series, as a dark, poetic noir/policier in a very Italian mode--but don't stop with the first book, do go on to the second for a more complete version of the genre and of Lucarelli's formula.
Posted by Glenn Harper at 10:10 AM