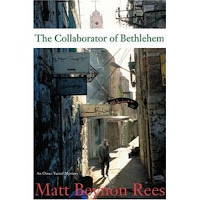 I'm getting to Matt Beynon Rees's Palestinian crime novels late--the second one is already out, I see. The Collaborator of Bethlehem is structurally an "amateur detective" novel, but in tone and development it's really much more like the Algerian police trilogy of Yasmina Khadra or the Berlin novels of Philip Kerr (I see there's a 5th in that series out now, too). Like Kerr and Khadra, Rees is depicting a city in which crime is pervasive in the social structure--in the Berlin novels by Kerr, it is of course the Nazi regime and its aftermath that provide the background; in Khadra's trilogy it's the turmoil of an authoritarian regime under attack by fundamentalist rebels; In Rees's novels, it's a territory in which the powers of order are constantly undercut by the Israeli army (not demonized here--they're mostly an anonymous force literally on the horizon, until tanks roll into town, with a mission for which civilian lives and property are irrelevant) on the one hand and by gunmen on the other. When a Palestinian Christian tries to run off the gunmen using his house to shoot at the Israeli's across the valley (and thereby drawing fire onto the house), the Christian, an outsider in the community, is denounced as a collaborator (after a Muslim is shot by an Israeli sniper). As you can tell, though the plot is simple, the context is very complicated. The amateur detective, Omar Yussef is a schoolteacher who thinks of the denounced man as a protege, and his quixotic effort to save the man and prove that one of the gunmen actually was the collaborator is the story. But the narrative is really less interesting than the portrait of Palestine, which is very detailed and very pessimistic, seeing no resolution for the innocent townspeople of whatever religion. The ending is actually a discordant up-note that seems, to me, to be tacked on when the writer realized that a series was possible. Not that the detective really accomplishes anything in the end, he just resolves some of his own problems after another unfortunate death, and begins to think of himself as a detective (despite his lack of effect). The solution to the mystery is likewise a bit artificial: the actual collaborator is a character whose behavior is inconsistent in ways that I can imagine some will find interestingly three-dimensional but that for me was just inconsistent. But Rees's command of the atmosphere of the book is admirable and effective. I'm off on a French crime tour at the moment (new books by the two leading French women crime writers--in translation anyway--Fred Vargas and Dominique Manotti. But sometime down the line I'll return to Rees to see if his venture into Gaza is as good as his portrait of contemporary Bethelehem.
Posted by Glenn Harper at 12:26 PM

I think you'll find that A Grave in Gaza lays greater emphasis on mystery-style plotting while retaining the elements you noticed in the first book.
===================
Detectives Beyond Borders
"Because Murder Is More Fun Away From Home"
http://detectivesbeyondborders.blogspot.com/