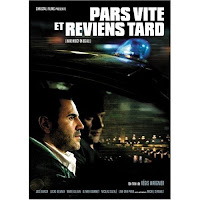 I got hold of a copy of the DVD of what is evidently the first film from Fred Vargas's distinctive series of crime novels, Pars vite et reviens tard by director Regis Wargnier (from the novel known in English as Have Mercy on Us All. I hadn't thought of it before, but there are NTSC, region 1 DVDs produced for Canadian viewers, with English subtitles, of French movies--a source I'll keep in mind for the future. The movie includes almost all of the characters and events of the novel but a substantial amount of the quirky character traits from the novel are obscured by the necessities of a screen play (and some of the actors were a bit surprising, to me, as embodiments of the characters). Camille has a small but crucial part, and Danglard's relationship with her is intact (details that might have gotten lost in a lesser translation to film). I got an unbiased positive opinion on the movie from my wife, who has not read the novels--and there's enough of the novel's nature to make it interesting to someone who has read it. There's a lot of language in Vargas's works that can't make it into the dialogue of a screenplay, after all. One reviewer complained that the movie fails to show the "village within Paris" that is the real subject of the book (even more than the plague), but all the elements of the village are here--shown instead of described, and therefore a bit sketchier. The movie is a vast improvement on the translation to film of The Laughing Policeman, which I recently saw--that has to be one of the worst movies ever made from a great crime novel (Walter Matthau as Martin Beck--I mean, really!) In Pars vite, the intuitive leaps of Adamsberg, versus the rational plodding of Danglard, are also here, seeming a bit abrupt in a movie, but still intact. I seem to be damning with faint praise, when actually I thought the movie was good fun. Perhaps unfortunate that I saw the DVD on the same day as going to the movie theater to see In Bruges, a powerful work of original cinema by Irish playwright Martin McDonagh, not based on a novel and therefore tailored perfectly for the movie screen (and seen on a big screen instead of the living-room TV). I'll be watching Pars vite et reviens tard again, though--it's a keeper that I'll be lending out to friends who have (and haven't) read the book.
Posted by Glenn Harper at 8:04 AM