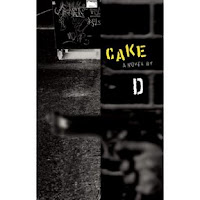 Back in the U.S.A. for a change, I'm reviewing a novel, set mostly in Atlanta (my former home town). There's at least one modern noir classic set in Atlanta, Down on Ponce, by Fred Willard, and it's certainly no surprise that urban noir should focus on one of the centers of hip hop culture and commerce. Atlanta has also in recent years been the site of one of the most spectacularly noir true crime stories, a murder-for-hire carried out by a drifter carrying a shotgun in a box of roses, delivered in dramatically hard-boiled fashion to the Buckhead home of a doomed wife, as well as a famous recent hostage situation and the Michael Vick case. Cake takes the terms of the hip hop or "thug lit" novel seriously but adds some twists from the broader world of noir fiction: D's novel compares favorably with Kenji Jasper's urban noir but also with George Pelecanos, Alan Guthrie, and Charlie Huston's Hank Thompson novels (with all of which Cake has a good deal in common). But Cake also reminds me in some ways of the noirest of classic noir, Paul Cain's Fast One. Both D and Cain are pseudonyms, both novels move very quickly toward doomed and fated endings. D's novel is also short, more in the tradition of classic noir (or Alan Guthrie, among newer novelists) than the contemporary, more expansive noir fiction. The assertively masculine quality of Cake is shared not only with thug lit but also with classic noir (Cake's female characters are mostly hookers, strippers, or baby mamas--the one exception plays the role of fate). The central character of Cake is unnamed, referred to throughout in the second person: there's a trick of cinematography that came to be known in the '80s as "suture," shot and counter-shot of two speakers, with the viewer "stitched" between them by the action of the camera. D's technique has a similar strategy, placing the reader in the position of the protagonist, almost as in a video game, by the use of "you" to refer to his character instead of "he" or "I." In a short, fast novel like this one, the device is very effective. In effect, "you" are on the run from a Brooklyn massacre (from D's previous novel, Got), moving to Atlanta to attempt to reboot your life by going back to school. But you move in with a cousin who's a small time dealer, and you get caught in the middle when a bigger dealer coopts his operation and starts killing people. Like Paul Cain's Kells, D's "you" isn't a thug, he's trying to stick to a principled position, to a certain humanity that's contradicted by almost everything in his situation. The results in both cases are met with the open eyes characteristic of noir rather than the rose-tinted glasses of some other genres, such as thrillers, cozies, etc.
Posted by Glenn Harper at 6:46 PM