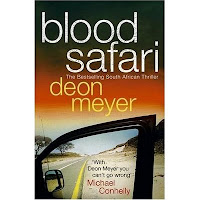 Most of Deon Meyer's crime novels from South Africa are closer to the thriller sub-genre than noir or police procedural, and Blood Safari is no exception. A thriller frequently features a highly skilled (though frequently psychologically damaged) hero who is for one reason or another tasked to save the world, or at least a corner of it. Meyer's heroes and plots are a bit different. His hero in Blood Safari, Lemmer (he doesn't like to use his surnames), is a bodyguard with a shady past, a man who recognizes that he has difficulty controlling his anger. He's skilled in fighting but doesn't carry a gun, and his job is to protect Emma le Roux, a woman who thinks her brother, long thought dead, has reappeared, and along with him a vague threat to her life. She's not a high-ranking politician or a famous journalist or the wife of the President or anything like that. Meyer stakes out a territory closer to daily life than to James Bond, but makes the reader care about his characters and their fates (and by extension, the fate of the new South African society that is their context), without the crutch of high crimes, terrorist threats to the world, etc. Lemmer must come to grips with his past and with changes to his carefully proscribed life brought about during his job guarding Emma, but there's no pat resolution to his struggle with those changes. And when the plot seems to veer toward a common thriller plot, even some plot elements he has himself used before, Meyer twists into something else. Lemmer, who is the narrator, has a lot of rules for conducting his life, and he's now finding them imperfect, particularly as they apply to his fixed views of women. His macho job and his particular form of masculinity are believable elements of the story, without overwhelming everthing with testosterone: Lemmer and Emma, the host of minor characters (good and evil and in between), and South Africa from the Cape to the Safari country in the north, are all vividly and sympathetically brought to life. Blood Safari is more measured and less myth-making than in his previous Hear of the Hunter, and more of a stand-alone plot than his Cape Town police novels (his first four novels are linked, major characters in one book becoming minor characters in another, and vice versa, in the manner of Balzac's Comedie Humaine). I'm a big fan of his first two books, Dead at Daybreak and Dead Before Dying, but he's nevertheless getting better and better, and Blood Safari is very good indeed.
Posted by Glenn Harper at 3:44 PM