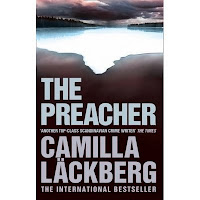 With her second novel, The Preacher (translated from the Swedish by Steven T. Murray and published by Harper Collins in the U.K.), Camilla Läckberg takes us into the true "heart of darkness": the family. There are stock scenes of family annoyances that are reminiscent of writers like Maeve Binchy, such as Erica's relatives (Erica is the writer who is the central character of this series set in Fjällbacka on Sweden's western coast, though Erica is mostly sidelined and pregnant in this book); her relatives and then another group arrive on her seaside doorstep and expecting to be waited on hand and foot. Erica is now living with her cop boyfriend, Patrik, whose current investigation is triggered by the discovery of a young woman's tortured body. But the host of characters swirling around Erika, Patrik, and the murder include members of a family estranged from one another in the wake of their father's favoritism (the father is the Preacher of the title) and an earlier set of murders. Plus Erika's sister, who escaped an abusive husband in the first book int he series, seems to be falling back into another nasty relationship while not having completely escaped the first. The plot is more of a pure police procedural than Läckberg's first book (which centered more on Erica and her work as a non-fiction writer and researcher), but the story doesn't have much forward motion. Not to say the book doesn't move along nicely, which it does, but that little is discovered by the police until the last 50 or so pages. Until then, the interest is mostly carried by characters who verge on the Biblical (Cain and Abel are specifically invoked) along wiht a bit of Romeo and Juliet, a bit of almost Faulkerian "Southern Gothic" (Northern-Southern Gothic in this case) and quite a bit of Elmer Gantry. In fact, the Preacher of the title signals quite a bit of anti-clerical, not to say atheistic, sentiment that I for one find refreshing in a popular novel--more of the "Northern" than the "Southern" in its Gothicism. We find out a lot more about the other cops in Patrik's station, too, some of them not very good cops, some downright bad cops, and several workmanlike--all fairly vividly drawn. I suppose more than any other Scandinavian crime novelist, Läckberg resembles Mari Jungstedt, since the family life of a central female character is important to both, though not always central to the story. Both set their novels in summer resort areas (though 2 very different resort towns). But if you appreciate Jungstedt, Läckberg will probably also appeal. In spite of the somewhat static plot, The Preacher includes a novel motive for a serial killer, and most of the torture is off-stage, with just a few glimpses into the minds of the torture victims (a short enough glimpse that the crimes are less in-your-face and at the same time not completely convincing). But overall, I recommend The Preacher as another interesting entry in the Scandinavian Crime stakes.
Posted by Glenn Harper at 2:07 PM