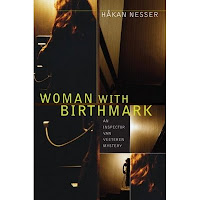 Håkan Nesser is known for building a complete fictional world (as Ed BcBain did in the 57th Precinct novels, set in a fictional “Isola”). But there’s another example of “world-building” in Nesser’s newly translated Woman with Birthmark, the kind of reconstruction of reality that a killer engages in when he/she rewrites the rules of civilized society and justifies his/her actions. Nesser’s killer’s reality also recapitulates a common pattern from the art world, in what is called "outsider art." Again and again, in middle age, a previously average person experiences a crisis of some sort (the death of a parent, usually a mother, is the most common event), and afterwards, the individual is seized by the necessity to create something, often a total environment (like Howard Finster's Paradise Garden), sometimes endlessly repeated works of art like whirligigs or paintings. Usually not thinking of themselves as artists (at first anyway) they create a kind of alternative reality, in contrast to their previously “normal” lives. Nesser's Woman with Birthmark presents just such a pattern of crisis and “creative” breakthrough, but in terms of a serial killer. Breaking from his usual pattern, Nesser gives the reader access to the killer's mind from the beginning, though not giving the killer's identity. At the death of her mother, a woman conceives a series of revenge killings that give her not only a sense of purpose but a transcendent satisfaction with explicitly religious and sexual overtones. We also get glimpses of the rather more ordinary lives of the victims, who nonetheless have their own “alternate realities” in terms of events they intend to keep secret from their wives, friends, and associates (and it is that secret reality that makes them vulnerable to blackmail and murder). Inspector Van Veeteren and his crew (whose personalities and investigative styles are given here in more detail than in some other Nesser books) are faced with making sense of the killer’s reality, in order to anticipate what is going to happen next. Nesser's usual wry wit is very much in evidence, as well as Van Veeteren's prickly and idiosyncratic personality. We know more about what’s going on than the police (the only mysteries for the reader are the exact circumstances of the event that provides the murderer’s motive and the exact progress of her murderous plan), so we can observe closely as the detectives try to piece things together. They do not make progress by sudden insights or even discoveries. They plod patiently on and very gradually more information is provided to them, as often as not through no effort of their own. That is the classic “method” of the police-procedural novel, but highlighted here by the amount of advantage that the reader has over the detectives. The plot itself is unremarkable, nonetheless, the novel moves swiftly forward, partly through Nesser’s frequently comic portrayal of the lives of the detectives and partly simply through his seemingly effortless prose. Nesser’s storytelling is layered with his invented world and the more concrete literary and cultural world: Van Veeteren, for example, makes a passing reference to a famous French film that he thinks might parallel the killer’s motive, without explaining the reference to the reader. But such nuggets in the narrative are not academic or pretentious, they simply add texture and depth. The ending is not something out of a thriller or even a mystery novel: the events instead take on a certain inevitability, referred to by the killer as “a sort of dark poetry.” In spite the dark theme and philosophical overtones, the novel has the lightness of tone that is a distinctive quality of the Van Veeteren series (there is even a joke about Scandinavia, as if to indicate that the world of the novel is somewhere outside that geographic zone, in spite of the author’s Swedish background). To say more would be to spoil not so much the plot as the texture or experience of the story. But I should emphasize that, lest let my suggestion of the philosophy in the book put anyone off, the story is brisk and well told, its deeper overtones embodied in interesting characters, lively conversations, and murderous intentions.
Posted by Glenn Harper at 11:33 AM