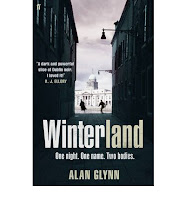 Winterland is a very good crime novel (a very good novel, come to that). It starts with a glimpse into the future of a character named Gina, who is caught up in something violent and beyond her control. The story then proceeds to a murder in a pub and to Gina's brother (don't get too attached to him, though he's a sympathetic character). Gina, who works for a failing software company in the midst of the economic downturn in formerly prosperous Ireland, is plunged into a violent subculture in Dublin and simultaneously into events that will shake up the government: if that sort of plot sounds familiar, Winterland in fact stands Stieg Larsson's Millennium trilogy on its head: Gina is no super-hacker, she's an ordinary grown woman driven by anger and grief to acts she would not have thought herself capable of, and into threatening situations she could not have imagined. Other threads of the plot include the machinations surrounding the construction (and leasing) of a huge new development in the Dublin docklands area that is moving forward in spite of the downturn (and in the face of certain other difficulties); the surviving son of a family that suffered a violent car crash 25 years earlier; and assorted businessmen, police, and others at the fringes of those stories. It's a big, complex book handled by Glynn with grace and with considerable tension and forward motion (warning: this book is a compulsive reading experience once the story gets cranked up--you may want to set aside some time because you won't want to put it down, particularly at some key points starting from about halfway through). Threads of the novel lead to several endings, with a few hanging on beyond the end of the physical book. The considerable violence is handled skillfully and believably, with all characters on the spectrum from innocent to guilty portrayed with nuance and sympathy. Even the most evil character is saved from caricature by Glynn's sympathetic portrait and by the complex nature of the secrets finally revealed about him and about what's been going on. I'm moving on to another new and highly recommended Irish novel (Northern Irish, really), The Ghosts of Belfast (know in the U.K. as The Twelve), but it will have some difficulty outperforming Winterland.
Posted by Glenn Harper at 12:14 PM

Good review, thanks. I really, really liked Winterland and although The Ghosts of Belfast has a very different tone it's just as good.

Thanks, John. I'm looking forward to your new book, too--coming out in the spring here apparently (though under a different title?).
Glenn

Anonymous said...
This comment has been removed by a blog administrator.
3:11 AM

Anonymous said...
This comment has been removed by a blog administrator.
9:39 AM