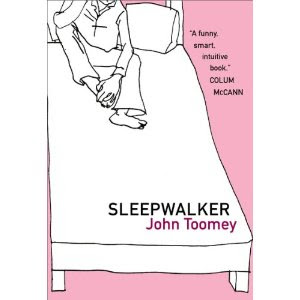 I've noticed lately that crime fiction seems to have become a touchstone for writers who want to write about contemporary life, particularly city life. A book I just finished, Sleepwalker, by John Toomey, is a comic portrait of an Ireland just poised on the brink of the boom going bust. The only crimes inflicted by or upon the characters in the book are emotional: there are some very funny scenes depicting the miseries that families inflict upon themselves and outsiders, and the main character, a slacker drifting along miserably from job to pub to bed, stupidly inflicts pain on everyone who loves or even likes him. The writer plays comically with fictional structures like the famous "unreliable narrator," and one of the comic turns concerns the narrators intrusions into the story.

But at a couple of points, Toomey invokes crime and crime fiction as a means of putting his story into context. In one passage, he contrasts the peaceful, if miserable, lives of his characters against the violence going on offstage, in the city only glimpsed by the reader and the characters themselves. More explicitly, he depicts a demoralized character thusly: "The things he thought he had earned on his own steam had been laid down beside him, like a framing murder weapon, carefully placed at the scene while he slept, ready to incriminate him and strip him of all credibility further down the plotline."

Just a passing metaphor, perhaps, but also a means of casting the characters miseries into a harsh comic light by the use of a framing device much more serious than what is actually confronting him. Comic crime fiction does some of the same sort of thing (I'm currently reading, or rather listening to, a Donald Westlake novel). So crime fiction and its particular toolkit are in a way a standard for considering modern life seriously, and also a means of viewing lives less stressed comically. Does that make any sense? Does the notion described above say anything about a novelist like Kate Atkinson who uses crime fiction as a serio-comic framing device for "literary" fiction?

Or perhaps I'm just overinterpreting, sequestered as I am in a warm house on a very cold day. Sleepwalker, by the way, is a funny book (perhaps not quite funny enough) and a cold, hard look at a culture on the brink of a disaster. It's published in the U.S. by Dalkey Archive Press, which has a particular interest in comic and off-center fiction around the world.
Posted by Glenn Harper at 12:33 PM

Nice post. I don't think you're reaching. I tend to rely on crime contexts in my own writing too. I think it goes back to the way crime and mystery fiction help bring an order to things, even when it's inviting doom and death. With such setups, there's something to be solved, or at least wrestled with. Maybe I'm missing the point a little, since you're speaking more about metaphor, but I do like where you're going with it.

Thanks for the comment, and you didn't miss the point at all.