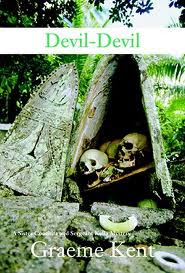 The detective in conflict with his boss is a common trope in crime fiction, but in his new Devil-Devil, Graeme Kent takes the theme further than anyone else I can think of. Sergeant Kella, of the Protectorate Police in pre-independence Solomon Islands, is by blood a native of Malaita, one of the larger islands, but he was educated in Western culture and is now caught between his native culture and the West, Western religion and traditional religion. When he is in the presence of his superior officers, all English, he is deferantial in a manner suited to his rank. When he's not in their presence, he ignores them almost completely.

Kella is not only a cop. He has taken on a traditional peacemaker role in his culture, through which is responsible for everyone on Malaita in a much more complete way than simply as a cop. As several people remark along the way, he will be a very important man in the islands once the English leave, and is already an important man within his culture.

His counterpart, Sister Conchita, is a young nun with a troublesome habit (no pun intended) of also ignoring her superiors, or at least of exceeding her role in the social and liturgical hierarchy. Although she does play a part in the working-out of the mystery (more about that in a minute) she's not an amateur detective, really. She's more of a Western foil (much more so than his police superiors) for Kella.

The novel, in terms of plot and atmosphere, has something in common with Charlotte Jay's marvelous Beat Not the Bones (set in nearby Papua New Guinea) and also with Leaphorn and Chee novels of Tony Hillerman (though Kella's cultural conflict is to some extent divided into two characters in Hillerman's stories of skinwalkers, ghosts, and ordinary murders). My wife was reminded of Colin Cotterill's historical/magic-realist/comic crime novels set in Laos. But Kella's adventure is more distinctive than the comparisons can suggest.

Devil-Devil is almost casual about some of the several murders in the story, and the moral tone of the book has more to do with cultural survival than the life or death of individuals. There's plenty of crime: not only murders but smuggling of various sorts, corruption, violence, etc. But the story is more political in a way, dealing not only with the cultural conflict but also with the waning colonialism of circa 1960.

An American anthropologist has disappeared into the mountains, a skeleton is unearthed by an earthquake, and omens foreshadow violent deaths that soon follow. Kella needs to find out what's going on, but he's not as concerned about English justice as with restoring order of a more fundamental sort. There are several sections that could have been from an adventure novel instead of a police procedural, as well as gritty scenes in rough and tumble towns. The story moves forward in loops and twirls rather than a straightforward investigation.

There are some aspects of the novel that didn't quite work, for me: some of the dialogue is a little stilted, and some of the characters are a bit one-dimensional. But in the context of a linguistic milieu that alternates between proper English and local pidgin, the dialogue could be appropriate, certainly much more so than any imported "noir-speak" drawn from urban crime fiction. And the characters reflect the larger frame that Kent is dealing with: the islanders notion of who the Europeans are is not particularly 3-dimensional (though Kella sees more shades of gray than others do), and Kella himself is not simply an individual: modest though he can be, and human in many ways, he's bigger than just a guy on the street (or in the jungle).

There's some humor in the book, mostly light-hearted, and a distinctively South-Seas kidnapping and imprisonment is one element of that. But even those elements are tinged with a darkness of both animism and human nature. This is an unusual crime novel, and it will be interesting to see how Kent develops the series. The U.S. and U.K. covers are more completely different than is usually the case--I think the prize goes to Soho Crime, for the U.S. version (the skulls, rather than the U.K. version's map), this time.
Posted by Glenn Harper at 12:19 PM