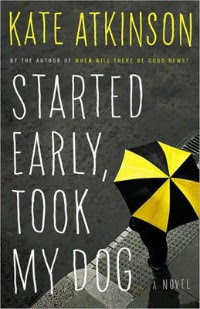 I'm not sure if it has already run in the U.K., but the TV series based on Kate Atkinson's Jackson Brodie novels is about to be shown on public television in the U.S. And I also don't know if there are plans to film Atkinson's latest (and so I've heard, last, for a while at least) Brodie novel, Started Early, Took My Dog. It's hard for me to imagine a film or TV show based on the book, but then it's hard for me to imagine any film adequately dealing with Atkinson's fictional universe.

Started Early, Took My Dog is full of parellelisms and coincidences, in a story based in Yorkshire and mostly in Leeds. There are parallels everywhere, within the "present-day" plot and between that and the flashback plot (set in the mid-'70s, with many references to the Yorkshire ripper, whose spree was just starting. But this is no thriller, and no Red Riding either, to cite that other Yorkshire crime novel/series that is bound to come up in any discussion of Started Early, Took My Dog. Atkinson's novel is instead a book of dazzling surfaces and profound depths, which constantly (through those parallels and the brilliant writing, calling attention to its fictional nature.

There are several kidnappings, beginning with a retired policewoman abruptly deciding to "buy" a child from a prostitute/junkie who is abusing the kid. Jackson, for his part, takes a small dog away from a man who is abusing it, establishing comic (and not so comic) parallels from the beginning. There's also kidnapping the the '70s plot, in an incident that provide much of the plot and links most of the characters. A third main character is an aging actress, succumbing to dementia, whose links to the kidnappings are tenuous until the very end.

Atkinson has a talent for combining lively writing with careful characterizations. A reader not only knows these characters very well, but ultimately cares about them. And Atkinson doesn't abuse the reader's concern (I won't explain for fear of revealing too much plot). The various characters and the intertwining plots (through the two eras of the story) hold the reader's interest all along, and in the last half of the book the pace picks up with new twists on various kinds of chases, retiring gangsters, police corruption, speeding trains (a parallel to an earlier Brodie book), TV cop shows, and damsels in distress. She also provides a child character who is affecting without being cloying, true but also comic: both a literary device necessary for the story and a lively element of the story (though she doesn't say much). Child characters are difficult (not to mention that dogs are a crime fiction cliche), but Atkinson pulls off these elements of the story as effectively as the "bigger" aspects of the novel.

One element tying the whole Brodie series together is Jackson's monologues with Julia, a character in the series from the beginning, who now serves as a kind of chorus as well as an idiosyncratic character in her own right. Atkinson wisely anchors Brodie's melancholy with Julia's flightiness: we need them both, even when Julia isn't really part of the story. Started Early, Took My Dog isn't perhaps for every crime reader, but it does reinforce a reader's convicion that genre isn't everything. Atkinson gives us the elements of the crime genre, sometimes turned inside out, but without ever condescending to the genre itself. It's a structure, much like all those parallels, that enables a good story and in this case a very good book.
Posted by Glenn Harper at 11:52 AM