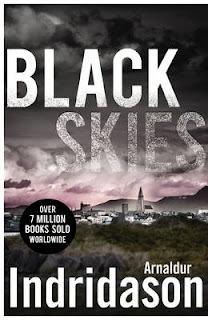 I had some doubts about Arnaldur Indridason's Black Skies when I ordered it, because it is centered on Sigurdur Óli, the least likable or interesting of the cops in the circle around Erlendur, his usual central character. Erlendur has left on a mysterious trip to the area in which he grew up (and where he lost his brother as a child), and the previous book in the series, Outrage (which focuses on Elinborg, the other running character) and Black Skies occur at the same time, with occasional overlaps as the two detectives consult with one another (and worry about Erlendur's extended absence.

I had (as it turned out, well placed) confidence in Arnaldur as a writer, though, and indeed Black Skies is very interesting. As the book explores Sigurdur Óli's life and character he first grows even less likable (without making the story less interesting). He can be a bit impulsive, and in his private life, self-destructive, traits that are given some context. He's also an unrepentant political conservative, going back to his school years (when he edited a conservative literary journal). He's also a bit of a fop, and his taste in clothes in addition to his character overlap just a bit with one of the great characters if Scandinavian crime fiction, Gunvald Larsson (of the Sjöwall/Wahlöö books). Sigurdur Óli is, though, less vocal and violent.

Perhaps the most interesting aspect of Black Skies is the use of overlapping plots. It's a common strategy to start off with a crime, then shift to another crime that eventually gives way to or becomes connected to that initial scene. Arnaldur plays with that theme here, setting up a gruesome scene that only very gradually comes into focus, while Sigurdur Óli concentrates on other things: primarily a mess he gets into when doing a favor for a friend. When he goes to a couple's apartment (after the friend begs him to scare them into giving up a blackmail attempt) he finds the woman in the couple almost dead, and runs into the assailant. To say more would be spoiling things. The blackmail plot, though, leads in very interesting directions before coming to a surprising conclusion.

One of the interesting directions is an investigation of the Icelandic banking practices that will (not long after the timeframe of the novel) lead to the crash of the country's economy (the book is set just before, but was written just after, the crisis). The ominous shadows of the crash loom over the book.

But the story is not an economic tract: it's aim is both broader, in terms of the society, and narrower, in terms of its vivid portrait of the detective and the numerous characters involved in the story's various threads. Though I'm particularly attracted to Erlendur throughout the series, and though the book focusing on Elinborg was very good, I think perhaps Black Skies is one of Arnaldur's best books (high praise indeed).
Posted by Glenn Harper at 2:01 PM

I just discovered your site and have been stuck here for a while! So let me suggest my novel The Obsession. Here's a quick summary:

This first entry in the Truth Beauty Trilogy is a vibrant novel of suspense and murder, by turns intriguing and surprising, as three smart, driven people match wits with their lives at stake.

At a conference in Italy’s lake district, American grad student Stanford Lyle is enchanted with Lina Lentini, a lovely Italian professor of comparative lit. And when she lectures for a term at his mid-Michigan university, she considers a fling with Stan—until she meets John Martens, a professor, author and Stan’s mentor. In her passionate affair with John, Lina becomes Stan’s obsession, a hated nemesis for John’s troubled wife, and the object of a vicious series of attacks aimed at destroying her reputation.

Lina loves the line from Keats, “Beauty is truth, truth beauty,” even as her life fills with duplicity. John is pledged to do the right thing with his wife but often does not. And Stan surprises himself with the depth of his own perversity.

Forced back to her home in Bologna, Lina begins to reset her life. Then Stan appears on her doorstep. When John joins them, Stan schemes, threatens and stalks the lovers, first under the city’s ancient porticoes and finally to the legendary Sicilian mountain town of Taormina with a shocking confrontation on the slopes of volcanic Mt. Etna.

For more info: www.tvlocicero.com. And here are a few lines from a new review by your colleague Victoria Best at Tales from the Reading Room (http://litlove.wordpress.com/2012/10/15/2918/#comments):

"Gone Girl has had a huge impact on the book world since it came out; whilst the other novel I read, The Obsession by T. V. LoCicero will be unknown to most people, I imagine. But both are pacy, gripping narratives about love grown monstrous and out of control…fascinating portraits of gender rancour, or the amazing ability men and women have to love and loathe each other with intensity. The Obsession is more straightforward in its premise; sexuality remains a dark and vexed region where reason holds no sway and the agony of unrequited love can provoke unstable individuals to violence…[T]his was the first self-published novel I’ve ever read, and I was properly impressed and surprised by the quality of the story and the writing."

If you're interested, I'll be pleased to get you a copy, paperback or ebook.