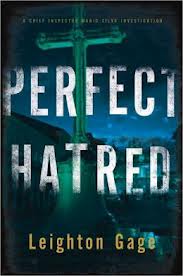 Leighton Gage's new Mario Silva novel, Perfect Hatred, is the second book that I've recently read that's partly set in the wild Tri-Border Area, where Brazil, Argentina, and Paraguay meet. The first was Sebastian Rotella's Triple Crossing, which drops a U.S. Border agent, undercover with a Mexican drug gang, into the lawless area. Gage's novel probes more deeply into the political and social realities of the area, as well as the impact of the lawlessness on the surrounding countries.

Perfect Hatred brings together three crimes: a terrorist bombing, the assassination of a regional politician, and a corrupt Brazilian's plot to assassinate the prosecutor who is about to put him in jail as well as Silva himself. A reader might expect the three plots to come together in the end, but Gage subverts the usual plot devices, while keeping all three plots moving rapidly forward.

Silva's team of federal police agents is split by his boss, half following the terrorist plot and half the political assassination. A young Muslim has kidnapped a baby, after murdering its mother, and planted a bomb in the baby's carriage, which explodes outside the U.S. consulate in São Paulo. In Curitiba, a candidate for governor of the state is shot in the head, along with a former associate of Silva's team, who has shot and killed the assassin.

One interesting development in this book is that the individuals on Silva's team have become so strongly characterized that Silva himself, though at the center of everything, does not dominate the story. Instead, the lead role is split among the team members, each an independent element in the collaborative whole. The result is a re-examination of the police procedural format, within the rapidly forward-moving story. Perfect Hatred is about justice and revenge, and the intertwining stories reach resolution in indirect ways, sometimes through inaction rather than action, or through outside actors being drawn into the plot. But Silva's team remains at the center, holding their own against a vividly drawn cast of other characters who range from outright villains through zealots, idealists, and innocent bystanders.

This is the sixth of Gage's Silva novels, each of which takes a different approach to the crime story and to the portrait of Brazil that he is progressively compiling. The books not only don't repeat themselves, they are also getting better and better as the series progresses.
Posted by Glenn Harper at 6:31 PM