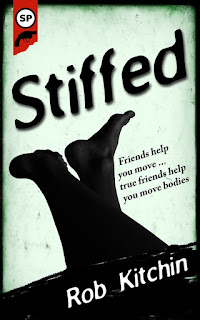 Rob Kitchin's new novel, Stiffed, is (to borrow Paul Cain's phrase) a fast one (and a funny one). It's a farce with guns and bodies instead of sex. Tadhg Maguire, born in Ireland but raised in a fictional New England town of modest size, wakes up one morning, hungover, to discover that instead of his girlfriend of less than a year, there is a hairy corpse in bed with him. In fact, the hairy corpse of the local crime boss's henchman. Instead of calling the cops, after being beaned by his wife, once she appears on the scene, he seeks the help of his friends in getting rid of his problem corpse.

From the point, the story descends into a spiralling assortment of problems for Tadgh and his friends, a motley group of outsiders who had been their own little clique in school. Each of the friends contributes his or her own vulnerabilities and strengths to the story, along with an assorment of cops and gangsters and perhaps the most dangerous of all, Tadhg's girlfriend.

In addition to the wild fights (with and without guns), hot pursuits (with and without cars), and other fast and funny occurences, there are some running jokes, not least of which is Tadhg's name, which no one can pronounce, giving rise to an assortment of tortured versions of the very Irish Irish surname. The American setting, which Kitchin mostly gets right, is another source of comedy (there are just a few un-American terms, like "press-up" instead of "push-up," most of which can be understood as Tadhg's lingluistic links to his homeland). Baseball-obsessed small-town America, complete with its own small-time mafia (in conflict with gangsters coming in from outside) is evoked with barbed accuracy.

The plot revolves around stolen money, and Kitchin draws out the essential storyline through all the twists and turns and even past the ending (stopping a book before all the threads are quite pulled loose is something he has done effectively before). I mentioned Paul Cain above, but the noir author that Stiffed resembles most is probably Donald Westlake, in some of his various incarnations: Westlake set a high standard for this sort of dark comedy, and Kitchin proves a worthy successor, in an even more tightly wound and rapid farce than those of the his predecessor.
Posted by Glenn Harper at 11:40 AM

So glad to hear you enjoyed this, Glenn! I agree with you that Kitchin has created a terrific story here with all of the hallmarks of high-quality screwball noir.

Hi Glenn, thanks for reading and reviewing the book. Glad you found it a fun read. Rapid farce is an apt description, I think.