Claudia Piñeiro, A Crack in the Wall 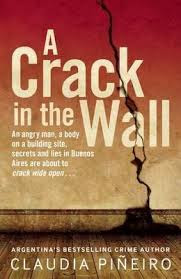 Argentine novelist Claudia Piñeiro's new book (published by Bitter Lemon Press and translated by Miranda France) shares some common ground with her previously translated All Yours (a death that may be accidental, a feuding couple, their troubled daughter) but A Crack in the Wall is a fuller and more interesting book (the best of her three books translated so far, in my opinion).

Pablo Simó is an architect who repeatedly sketches his design for an original building but spends most of his time doing non-design work for an architectural firm that doesn't value him any more than he does himself. He's a worker-bee, without ambition (except for his sketches), the underground man (in a Dostoevskyian metaphor, he commutes via subway when there are more direct ways to get to work on the surface). H longs for Marta, his coworker in the firm, while settling into dull routines with his wife at home as much as his working life in the studio.

The novel opens with a disruption from the past: a few years earlier, a man had died on their worksite and he had helped his boss and Marta to (literally) cover up the matter. Now a young woman has appeared in the office asking about the dead man. Pablo has to deal with his memories of the past event (along with another hint of Dostoevsky, in the guilt and fear associated with the past event), his attraction to the young woman, and the stultifying realities of his daily life.

Pablo's career is perhaps more reflective of the realities of most architects' lives than the hyper-romantic Roark of Atlas Shrugged, but as in that ponderous novel, Piñeiro is using fiction in a philosophical way. But her philosophy is leavened by wit and by links to a French (rather than Russian, though I've referred to a Russian a couple of times) tradition of philosophical writing that is anchored in daily reality (I kept thinking of Camus as I was reading the book, but perhaps more pertinent would be the "hard" fiction of Simenon). In A Crack in the Wall, Piñeiro maintains the reader's interest at multiple levels: the story moves forward in its time-split way, the characters are fascinating, and the intellectual interest is maintained in an entertaining way.

And the conclusion is also satisfying on several levels. We do find out what has been going on (at the same time Pablo discovers the truth), and Pablo himself makes a very interesting career choice. He also resolves his family life, partly through a crisis between his daughter and her mother that forces a choice on him, as much as does his professional change of direction. While Thursday Night Widows was interesting, it moved forward slowly in fits and starts. All Yours is much faster and shorter, but is a bit light, in terms of its scope. Both those novels were satirical in their intent and development, but A Crack in the Wall takes the satire to a higher level, as well as tighening and focusing the crime-and-guilt elements of the story.

Thanks to Bitter Lemon for bringing us this book, which I've already passed along to two other readers (and I expect to keep recommending it).
Posted by Glenn Harper at 9:34 AM