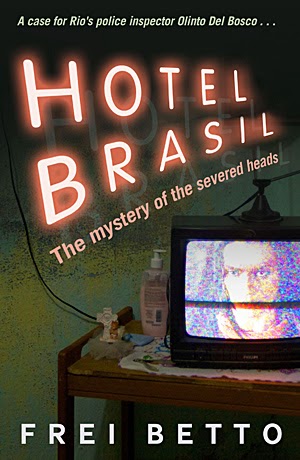 Hotel Brasil, subtitled "The mystery of the severed heads," is less a crime novel or even a mystery than a social satire that stakes out a slice of life in Rio de Janeiro and explores it thoroughly and enjoyably. But if you're expecting a mile-a-minute thriller, a police procedural, or a noir crime novel, the book will defeat your expectations (though maybe that's a good thing, in the era of  foruula fiction?).

Betto, who according to publisher Bitter Lemon Press is a priest and social activist, begins and ends the book with grisly murders with beheaded victims, and there are others along the way. But there are frequent digressions into each of the "closed room" sort of mystery that the initial murder sets up (each of the denizens of the low-class hotel of the title, in the Lapa section of Rio). As each is interviewed by the police detective, his or her life story is explored by the narrator in quick, interesting sketches that frequently demonstrate the theological and political interests of the author.

But one of the major subjects of the satire is publishing in Brazil, as in Patricia Melo's In Praise of Lies, reviewed here a couple of years ago, which shows a crime writer turning to self help writing in order to make it big. Betto's central character, Cândido (surely named after Voltaire's satirical hero) is a ghost writer and former seminarian who is talked into a career in popular writing by his publisher, with comic results that give the character opportunities to demonstrate his sympathy for the spiritual, the underprivileged, and various philosophical topics. Cândido also keeps up a running dialogue with an "inner self," whose name is Odidnac.

There is also a touching romance, an adventure concerning a lost girl living on the streets, and some black magic, plus the individual portraits of the hotel's tenants are lively and interesting. There's also a wider portrait of the political and social realities of today's post-junta Brazil, and one that doesn't pander to foreigners' conceptions of fun loving, carnival-seeking, beach-hanging, or favela-dwelling Brazilians. For Brazilian-native mystery or police precedural, go to Garcia-Roza; for an insider/outsider's unflinching vision of the country's problems, to to the late Leighton Gage. But for a serio-comic but also bloody, romantic, and touching tour of Rio, Hotel Brasil is entertaining and enlightening (and continue's the amazing world tour of crime fiction being offered by Bitter Lemon).
Posted by Glenn Harper at 1:08 PM

Thanks for bringing this noir story to our attention. As a big fan of noir (and an author), who btw lives in Rio, it's good to know that the international noir is alive and well. It's very difficult to find blogs and forums that exclusively cover noir literature.