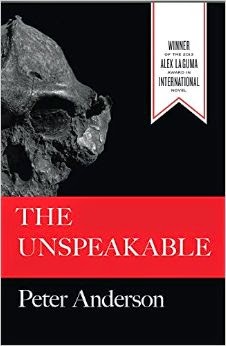 In The Unspeakable, set in the dusty northern provinces of South Africa in the last decades of Apartheid, Peter Anderson invokes a number of literary precedents, but one in particular, James Hadley Chase, whose novels are glimpsed in a roadside diner’s book rack, kept coming back to mind as I read the main narrative thread of the novel. There is a pulp-noir sexuality driving the story, as well as a cast of characters (the professor, his pretty young girlfriend, a cameraman who is her former lover, and a black sound technician and driver) whose interactions lead toward a violent blowup.

The story is told in the voice of Rian, the cameraman, hired to record the professor’s documentary film on the origins of the human race, but the novel’s roadtrip through the South African wilderness also provokes Rian’s memories of childhood on an Afrikaner farm, and these reminiscences are vivid and evocative. Particularly in the longest of these flashbacks, dealing with events leading up to the father’s suicide in front of his young son, Anderson not only suggests some South African classics such as J.M. Coetzee but also America’s Southern Gothic fiction, with its folkore and racism.

In the best segments of Rian’s adult story, the casual racism of the white people (Rian included) in contrast to the hardscrabble lives of tribal peoples encountered along the way suggests another South African precedent, the detective stories of James McClure, particularly in the direct portrait of lives violently twisted in mental and behavioral ways by Apartheid.

But most of the narrator’s main story depends on a series of adolescent fantasies and absurd actions on the part of all the white principals, involving jealousies and overt sexual proposals that are necessary for the plot to move to its tumultuous conclusion, but are in themselves a bit hard to accept. Here again, a South African precedent comes to mind, in Tom Sharpe’s lampoons of an Apartheid-era police force, but Peterson’s characters are not drawn as broadly or with as much comedy, and the contrast to the other parts of the story is jarring. At one point, the professor (mostly portrayed as a buffoon) suggests the group abandon the archaeological documentary to film instead an interracial porn film featuring the girlfriend and the driver, which would be a dangerous act for the driver in that era. And several acts of violence seem arbitrary and unmotivated.

At one point the author, through his narrator, suggests that the novel’s title refers to the possibility of addressing the unsayable by means of stories, but there is also an unspeakable act at the end, a chilling indictment of institutional racism (again reminding me of McClure’s evocation of Apartheid), flowing directly from both the naturalistic and absurd elements of the story, and its impact requires a reader to accept both at face value.
Posted by Glenn Harper at 2:19 PM