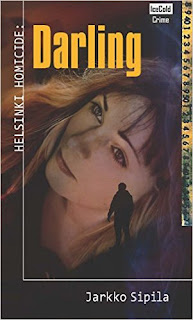 I haven't read all of Jarkko Sipila's Helsinki Homicide series, but the current one (Darling, translated ably by Katriina Kitchens) is focused less on Detective Lieutenant Kari Takamӓki than on his team (in comparison to the ones I have read). The result is very good, right up to the end (which I found a bit rushed and a bit more brutal in a casual way than anything that had come before). I kept thinking of Ed McBain and the 87th Precinct books, in the way that Sipila handles the shifting point of view and the broadened focus on the characters.

The cops are interesting and well differentiated from one another, and along the way another interesting character, defense attorney Nea Lind, also becomes an important aspect of the story. The plotting is also off-beat in an interesting way. When a mentally handicapped adult woman is found dead, the police focus in on a group of men (including the caretaker in her apartment building) who hang out together in the Alamo Bar; each in turn had been exploiting the dead woman sexually. But the police focus in on the caretaker, who quickly confesses, but also asks specifically for Lind as his attorney. The case seems closed early on, with the police simply  consolidating the evidence.

But Lind and a reporter who reluctantly picks up the story, at her editor's insistence, begin to pick away at the case, leading up to the violent conclusion (which is, as it happens, what it takes to convince the police about the truth in the case).

A quick and entertaining ride, if a bit bumpy at the end (imho).
Posted by Glenn Harper at 1:21 PM