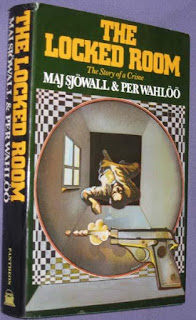 When the solution to both crimes finally arrives, the criminals don't exactly come to justice, at least not in any conventional manner. But the novel's conclusion is satisfying in several ways: in its ironies, in its endorsemenet of the lives of those at the bottom of Swedish society, and in the private life of the usually doleful Beck. In the end, this is no longer my favorite Beck novel (perhaps The Fire Engine That Disappeared currently holds that title), but is a reminder of the very high standard that this series set for  crime fiction in Scandinavia, and indeed everywhere else.
Posted by Glenn Harper at 3:18 PM

Thanks for this informative "blast from the past" review.