Italian noir (by Italians and others) 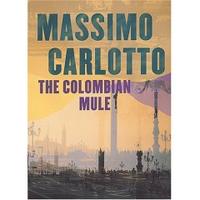 Italian crime novels are, more than for most countries, divided into those written by Italians and the myriad of novels written by English, American, and other writers about Italy. Some of these non-Italian writers live in Italy (Donna Leon, Magdalen Nabb) but a lot of others are little more than nostalgic tourists, writing about what they remember from their vacation. Among the Italian writers, there are a number available in English, including the novels of Andrea Camilleri (which have been made into a TV series by RAI, the Italian television network--these TV versions of the novel have been shown on American TV on a unique public TV station in the Washington DC area, the MhZ networks). There are also the noir novels of Carlo Lucarelli, which have a magic-realist element that I, for one, find a bit distracting (but they are very noir indeed).
The Italian books that I've been reading lately include a very noir series by Massimo Carlotto, set in Padua and Venice, and Gianrico Carofiglio (set in the city of Bari, in the Puglia region--the heel of the boot of Italy). Carofiglio's novel that is now available in English (Involuntary Witness) is really a courtroom drama more than a noir story, but it's entertaining nevertheless. Carlotto's books (The Colombian Mule, available in the U.S. and U.K., The Master of Knots, and The Goodbye Kiss--the latter two forthcoming in the U.S. and already available or available soon in the U.K.) are underworld novels. His characters are Alligator (you'll have to read the books to find out about his nickname) and his pals. The plot deals with human and drug trafficking, from Colombia to Italy, and the "heroes" are about as shady as the "villains." Alligator's crew, each with his specialty in dealing with the lowlifes outside this inner circle of friends, constantly dodges the forces of law and the threatening criminals with skill and humor--hey, it's a formula, but it's an entertaining formula, and set in a part of the world that's worth exploring (Padua is very different from Venice, though both cities are involved in the story). One thing that I found particularly interesting in the plot and especially in the resolution of the story and in a very telling Author's Note at the end is what turns out to be an overarching theme of the book: Italian politics, and in particular prison politics. There is a twist out of fiction and into reality delivered by the Author's Note, and also by the bio offered on the book's front flyleaf (Carlotto was a famous man in his younger years, convicted of a crime he didn't commit, on the run from the law, and then emprisoned for years before being spectacularly cleared of the crime).
Posted by Glenn Harper at 12:25 PM