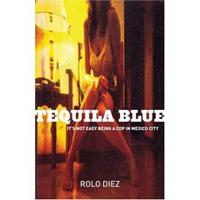 Rolo Diez's Tequila Blue is a deceptively simple, Mike Hammer-ish tale of a corrupt, hard-drinking, constantly womanizing, and sexist policman in Mexico. The novel is short, but the tale nevertheless begins to drag because of the first-person narrative by the annoying detective, Carlos Hernandez, laying out his daily round of bribe collecting, playing around on his wife, and drinking. The actual case that the book is purportedly about, the murder of a gringo in very suspicious circumstances (a blond transvestite was seen leaving the room in which he was killed) doesn't begin to take the foreground until halfway through the book. But as Hernandez begins to focus on the case, and to suffer the consequences, the novel grows in power, finally clarifying the short first chapter and the nature of the narrative all along. Tequila Blue is ultimately a deeply dystopian, comic and tragic portrait of a chaotic contemporary Mexico. Diez is an Argentine emigre living in Mexico, and this deeply pessimistic novel could perhaps only have been written with an outsider's eye on the social circumstances of his adopted home. A comparison to Paco Ignacio Taibo's detective novels is unavoidable: Taibo is an insider in Mexican literary circles, and his detective stories are closer to magic realism—though they are dark, they are not as tragically pessimistic as Diez's world ultimately is. And though both writers use comedy as a tool in their creation of the fictional world of their books, Taibo's comedy is more self-consciously literary and his characters remain just that: characters in a novel. Diez's comedy is broader, more tragic, and more involved in social than literary commentary.
Posted by Glenn Harper at 9:35 AM