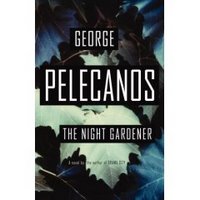 My rule is that I only review non-U.S. crime fiction here, but I'm going to break my own rule for a novel that is not only based in the U.S., it's based in my own neighborhood. George Pelecanos lives in and writes about the same neighborhood, from suburban Maryland to the city of Washington, that I live in and work in. So if I'm breaking the rule, I'm breaking it all the way, shifting from distant lands to my own back yard. The Night Gardener is Pelecanos's best novel so far. I started reading his books after he'd published 4 novels, a trilogy about a private detective and a stand alone noir thriller that recalled the great days of pulp noir (Shoe Dog). One of the pleasures of reading them was seeing familiar streets and places through the lens of noir fiction, but his books had considerable power from the beginning, as noir and as portraits of the Capitol area. Powerful though they were, Pelecanos's earlier novels (not only those first four but throughout the first half, roughly, of his output) shared a common structure: a troubled good guy becomes disillusioned with the ability of the forces of law to deal with a criminal, and he assembles a group of friends to take justice into his own hands, vigilante style. The books typically ended with a bloodbath, and along the way there was much incidental material about popular music, bars, and drunks, as well as an atmosphere of despair. The Night Gardener has a shoot-out toward the end, much like the earlier novels, but the incident only resolves one of the plot lines, and is related to revenge in the drug trade, not the act of an avenging (flawed) hero. And this is the first book in which Pelecanos seriously investigates the world of homicide police (as well as the first book, apparently, that is based on research with a police force, DC's Metropolitan Police). The book is complex and compelling, dealing with a murder that for several reasons conjures up memories of an earlier murder spree that was never solved and thus pulling together two retired cops and a working detective who were at one of the crime scenes related to that earlier murder. None of the details fo the story adhere to a stock plot, and the resolution is satisfying without being cliche (the solving of the contemporary murder is particularly nuanced). There are flaws, to my mind, in Pelecanos's writing that are also evident here: some of his family men are a bit smug about family life, as is the narrator. And there's a strain of homophobia that is ineffectively countered here by a couple of politically correct speeches by leading characters--not enough to overcome Pelecanos's portrait of a couple of gay or gay-ish characters. The only positive gay character is dead. And Pelecanos is very self-righteous about redevelopment of the city and its suburbs, editorializing about the kinds of bars he likes and dislikes, the kinds of development he disapproves of, and so forth. But you can't say he hides his opinions, and if you step into his world, his stories are compulsively readable. If you haven't read his work, this most recent one is a good place to start--it recapitulates a number of his themes but in a more effective way than he's done before. Perhaps he's taken some lessons from the excellent HBO noir-detective series The Wire, for which he's been a producer and writer.
Posted by Glenn Harper at 5:08 PM