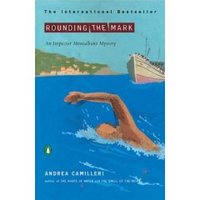 With Rounding the Mark, Andrea Camilleri steps more closely into the territory of Leonardo Sciascia. Like Sciascia, Camilleri in this novel uses actual events to bracket his story and takes an explicit stand on national politics. But Camilleri's tone is very different overall. For Sciascia, much is unspoken; he uses little dialogue, mostly describing and implying events in the narrator's voice. At the time Sciascia was writing, that stance was an explicit metaphor of Sicilian realities, in particular the famous "omerta," the vow of silence with which the mafia imposed its own principles and its own place in Sicilian reality on everyone else. Camilleri's Sicily has changed, at least somewhat. A great deal of any Camilleri novel is dialogue, and there is much discussion of current realities, even those of the mafia. The newest of the Commissario Montalbano series, Sicilian police procedurals, is out in English. The Italian title is more literally "rounding the buoy," actually. As has previously been the case, this book revolves around the sea, seafood, trafficking (of goods and people), and Montalbano's friends and cohorts. Though the crime is very dark, and the mood, health, and personal life of Montalbano are all dark, the tone is typical of the series: light, often comic, and always concerned with food. One of the contributors to Montalbano's black mood is in fact the closing of his favorite trattoria. It's in the interplay of the ensemble (here it's Augero and Fazio plus the irrepressible Catarello from the police, plus a Swedish woman who's been in a few of the previous novels) and their conversation that provide the comedy. The plot, also as usual, moves in fits and starts, less a logical investigation than an accumulation of events and facts that eventually leads to a satisfying conclusion. In this case, as in some but not all of the others, there is a police raid that has almost James Bond overtones, though with more human than superspy in terms of the characters' capabilities and motives. Camilleri's novels are short, enjoyable, and offer a window on coastal Sicily, all very good things. I'm beginning to get a little tired of the English translator, Stephen Sartarelli's use of dialect to mimic the Sicilian dialect of the Italian original: there's no real equivalent in English, and the result makes Catarella in particular sound like a hillbilly from Brooklyn. But the Italian and Sicilann phrases and the dishes in the trattoria (helpfully explained in the notes) are a delight, and the series moves ahead at full speed with Rounding the Mark.
Posted by Glenn Harper at 4:47 PM