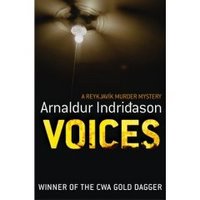 A few more titles in the area of Scandinavian noir are about to be available in English. The first is Voices by Arnaldur Indridason (soon to come are new books by Liza Marklund and Jo Nesbo--the new Marklund sounds as if it may not be a great one, but the Nesbo is one I'm looking forward to, it's a "prequel" to the book already released in English by him--actually an earlier book released out of order). Voices is better than Indridason's 2nd book, Silence of the Grave, and almost as good as his first, released in English under 2 titles, Jar City and Tainted Blood (the book is identical, just 2 different titles). Not to say that all of them are not very good, because they are--just that the first one has stayed with me, and I admire that one particularly. Voices concerns the murder of a doorman/handyman at a hotel in Reykjavik, murdered in his basement room while dressed in a Santa Claus suit with his pants down around his ankles and a condom on his penis. And who says the Scandinavian crime novels are humorless. Actually, there's quite a bit of humor in Scandinavian noir, but like the dead Santa, it's very dry, almost earnest even it its comedy. The dead man turns out to have been a child star, and the cast of characters includes his surviving estranged family, a nasty bunch of hotel employees, the usual crowd of homicide detectives familiar from the first 2 novels, plus a female crime tech who is a possible love interest for Erlandur (Indridason's chief detective) and a couple of prostitutes. A bigger cast than Silence of the Grave, but like that novel occurrences in the distant past hang heavily over the living and the recently dead. The past and the current murder share time with Erlandur's ongoing struggle to find a relationship with his formerly estranged daughter and with the other detectives' attempt to find time for Christmas preparations that their families depend on them for. What I like about Indridason's novels is what I look for in noir--the ordinariness of life, the frequent banality of motives for murder, and the struggle of the characters to find an emotional refuge in the hostile contemporary environment (plus a view of Iceland you won't find in the guidebooks). Voices provides all of the above, and quirky humor--what more could a noir reader ask for?
Posted by Glenn Harper at 8:54 AM

Hi, I just found your blog and am very pleased to find a place for recommendations. Thank you!
Bill D.

I really enjoyed Jar City and Silence of the Grave. I thought the denouement of Jar City was weak becuase the author does not understand the meaning of "double blind" -- you can't "break the code" by definition. But in a sense that's a cavil, becuase the books are so evocative. I am very much looking forward to Voices but am waiting for it to come out in paperback.
Have you read any Liza Marklund? She's another Scandinavian crime writer I have discovered recently, and enjoy tremendously.
I came here via Eurocrime, by the way. I like your blog a lot. Hope to see you at Petrona sometime.
Best wishes
Maxine.

Maxine, I'm a bit crestfallen that I missed Indridason's misunderstaning of double blind. Without wanting to give away too much, the code and everything it sought to protect was a highlight, a fine example of that criterion I keep going back to: it was unique to the novel's Icelandic setting. But I'm with you in having enjoyed Jar City.