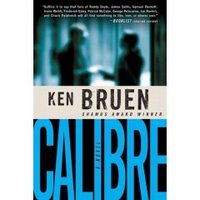 Ok, I'm addicted. I keep saying that I'm not reading any more of Ken Bruen's books, but I just finished Calibre, the latest in the Brant series about the Ed McBain-obsessed cop in Southeast London, as well as his cohorts. This series has none of the sentimentalism of Bruen's other series set in Galway. But Calibre has the same roughness and the same references to other noir authors (and the same misspellings of writers' names, as if the books are written and edited so fast that fact-checking is simply not looked after). Calibre is certainly a quick read, carelessly but effectively plotted--things don't happen according to any cliches of the genre, and plot lines are not always followed up (also a characteristic of Elmore Leonard's books, and one of the reasons that his stories are so realistic). In spite of Brant's dedication to the 87th precinct novels, it's really more Leonard and Jim Thompson (the favorite author of the primary villain and alternative point of view in Calibre) that are the models for Bruen. Unlike Bruen's other series, the Brant books also feature several other cops (the only factor that mirrors Ed McBain's series), with new ones added from time to time. The black policewoman, Falls, has had a hard time but seems to be rising up from her low point in the previous novel. Tensions between Falls and other cops are unpredictable and often comic, and Brant's pugnacious character is also often funny--making this note only a more life-like but also more fun than others of Bruen's books. It sounds like I'm giving the author grudging respect, but as sketchy and incomplete as the Brant books are, the are true to noir, fun to read, and each different from the other. The Jim Thompson obsessed villain here is an accountant who kills people who are impolite, and the distinctiveness of his social role and his personality are compounded by the quirky resolution (or non-resolution) of his story. So this one is recommended, even if I can't recommend Bruen's Irish novels.
Posted by Glenn Harper at 6:33 PM

Glad to read about a new Brant novel on the way. (What happened to Roberts, though?) Those books are like nothing else. I was especially interested in your comment that the books are true to noir. As violent as they are and as low as the characters sometimes sink, the books are so high-spirited that it's hard for me to think of them as noir. Have you read Bruen's collaboration with Jason Starr, Bust? (Hard Case Crime) It's as much fun as the Brant and Roberts books, and you might find it better plotted. (You'll also find the same annoying quotations from novels and pop songs that pops up elsewhere in Bruen, but this is a negligible drawback.)

got both Calibre and Bust last month not touched either yet...read the rest of the Brant books but none of the Taylor series....I don't tend to overanalyse what I read but have to say I enjoy the name dropping/book dropping thing in his books......gives me hints on who else I ought to read,
Colman