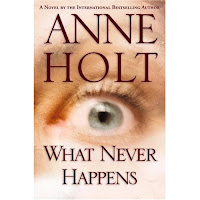 What Never Happens (The Final Murder in the U.K.), the second of Anne Holt's Norwegian crime novels, has arrived in English, following last year's What is Mine (Punishment in the U.K.). I had some problems with What is Mine, but the new book is very satisfying, onn several levels. What Never Happens takes on the most clichéd of all popular crime plots, the profiler-and-serial-killer plot, and turns it inside out. There is an element of literary legerdermain, almost of metafiction, that I can't go into without giving the plot away, but even before that aspect of the book kicks into gear, Holt undercuts the profiler plot by turning it into a domestic conflict--Johanne and Adam, the FBI-trained profiler and high-profile cop of What is Mine, return and are now married. In addition to the strange daughter Johanne brings to the marriage, they have just given birth to a baby daughter, and Adam is supposed to be taking some paternity leave. But someone begins killing celebrities, Adam returns to work, and Johanne is asked to help with the case. But the stresses of having a new baby intertwine with the stress of the case and Adam and Johanne bicker and fight through almost the whole story. One of the charms of What Never Happens is the very real, tense but also comic portrait of a family under both normal and abnormal stress. As in the earlier novel, the point of view shifts between Johanne, Adam, several other characters, and the murderer (whose identity is only made clear late in the story), but the narrative from the murderer's point of view (which I found distracting and unnecessary in What is Mine) works pretty well here, leading gradually toward the final "reveal." And where What is Mine ends with a series of climactic coincidences, What Never Happens undercuts a reader's expectations (and the conventions of the serial killer plot) at every turn, right up to the final pages of the book. The contrast between the complex murder plot and the very ordinary (but tumultuous) family life of the principals is very effective. Several narrative sections from other characters' points of view seem beside the point and simply distracting, but each one eventually ties into the overall narrative, like pieces of a puzzle that is not a clockwork machine but a varied and believable social pattern, with overtones of politics, show business, and literary crime. The U.S. (and Norwegian) title, What Never Happens, resonates in the motives of the killer, the lives of some of the victims, and ultimately the way the plot works out (and doesn't work out). All in all, a very dark, sometimes funny, and finally complex crime novel that satisfies on many levels--a substantial addition to the Scandinavian crime wave.
Posted by Glenn Harper at 6:46 PM