A Swedish crime novel of a different sort 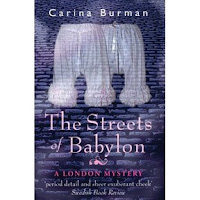 Among the very large crop of Scandinavian crime novels being translated these days, there is one that stands out as completely different: Carina Burman's The Streets of Babylon: A London Mystery. The translator is the aptly named Sarah Death (her translation is lucid, fortunately--perhaps the most exemplary aspect of this publication, particularly apt since the novel deals with the subject of literary translation). The title gives away part of the novel's difference: it's about Victorian London, at the time of the great world exposition (early in Victoria's reign). The narrator/author (I'll come back to that designation in a minute) is a Swedish author of popular novels (so popular that she is recognized repeatedly in the novel by her English fans) is the oddly named Euthanasia Bondeson (the oddness of her name is remarked upon in the novel, but still strikes me as silly). Euthanasia's young niece and traveling companion, Agnes, disappears not once but twice, the second disappearance setting the novel's plot into motion. On a trip to London to see the world's fair and the famous Crystal Palace which housed it, the disappearance of the author's niece instigates a search for her through slums and fine houses, among transvestites, titled artists, prostitutes, and so on. One of Euthanasia's fans, the chief detective of Scotland Yard, resists Euthanasia's attempts to play amateur detective, but ultimately appreciates her talents in that area. Of course, there are inevitable echoes of the Whitechapel murders (not too explicit, fortunately) but the fate of Agnes proves to lie elsewhere. The whole plot is cheerily told in a style that is part potboiler and part an excuse for the charming and eccentric authoress to gather material for her own next book (hence my earlier use of the term narrator/author to describe her). There are numerous literary references (Dickens and Wilkie Collins make an appearance, Euthanasia reluctantly reads a novel by one of those "Yorkshire sisters," and is ultimately won over (could it be Wuthering Heights that she's reading? Jane Eyre? It's not quite clear--if you recognize which it is, please let me know). The whole thing is charming, but the believability quotient is pretty low, resulting in a lack of much sense of threat concerning poor Agnes's plight. And in the end, Euthasia is sailing away for future adventures and (presumably) further Carina Burman novels, suggesting that she has in mind a kind of travelogue of the mid-19th century world, in the form of potboiler novels starring our intrepid amateur detective. I understand that The Streets of Babylon is popular in Sweden and beyond, and I at least was interested enough to finish it (and I appreciated the occasional glimpses of Sweden in that period--a few years before the birth of August Strindberg, whose novels were the topic of my own doctoral dissertation, as it happens). But I don't really go to crime fiction for "charming," even if the charm is contrasted (as it is here) with the dark and dangerous aspects of society at the time. For me, Burman's charm quotient overbalances her social conscience and even the slums seem to gain charm from Euthanasia's presence there. A novel that, perhaps, is not digging in the muck but casting perfume over it. Too sweet for me. Anybody have a varying opinion? I'd love to hear a defense of this odd (to me) Swede.
Posted by Glenn Harper at 4:06 PM

Dear Glenn,
As I work for the publisher, I am obviously not the one to give an impartial defence of The Streets of Babylon - I do, however, know the book very well and know why we decided to publish it.

Firstly, thank you very much for taking the time to review the novel. It's very hard to get new writers in English the attention they deserve and publishers like us very much appreciate the work that you do.

You're very right to point out that this novel 'stands out' from other translated crime fiction. There are a number of very good publishers who specialize in this kind of fiction (Europa, Arcadia and Bitter Lemon come to mind) and it was not our intention to compete with them. We chose The Streets of Babylon precisely because it was like nothing we had read before: a comic Swedish crime novel set in London written by a woman and from a woman's point of view. This in itself recommended it to us, that we knew it was well written and that Sarah Death was going to a brilliant translation sealed the deal. All this seems to me a strong enough defence in itself but to take your specific point ('perfume over the muck' was a good turn of phrase), the implication seems to be that you found that the book didn't quite have enough depth to your taste.
Whilst respecting your opinion I'd like to say a couple of things: Firstly that although Euthanasia IS very charming, she is also immensely self centred and pompous. Her narrative is imagined to be a work of self glorification to a fictitious Swedish audience - so she would inevitably gloss over not just the mucky bits, but also anything that threatens to remove her from centre stage.
Secondly, much of the depth of the novel comes from the games that Carina Burman plays, often taking the book away from straight crime fiction. For instance, Euthanasia is based on a nineteenth Swedish novelist Frederika Bremer, who apparently had something of an obsession with food hence the lovingly descriptive passages about gigantic meals. Whilst there is no reason that even a Swedish reader should recognise this, the book is full of such referencing and much of the satisfaction, and depth, of the novel comes from that, perhaps at the expense of darker realism.

To Kit @ Marion Boyars:
Your comments are much appreciated, and I must say I agree with all of them. What surely came across in my review of The Streets of Babylon as negative criticism was largely only meant as commentary on the difference between the "noir" genre and the cozier, almost comic opera quality of Burman's book (so that any fault I find is really my own, in having erroneous expectations of the book at hand). I must reiterate, too, that I agree that Sarah Death's translation is exemplary, pitch perfect for the sort of novel The Streets of Babylon is, rather than the sort that I typically am interested in. I don't know Frederika Bremer's novels (though I suppose I should) as I concentrated my (limited) research in Scandinavian literature to novels with the heavier tone of the bohemian and avant-garde era some years later than the mid-century of Burman's novel, and was more interested in the social background and social consciousness of my dissertation topic, the novels of Strindberg. Perhaps the choice of that topic many years ago and my choice of review topic on this blog now reveal a consistent strain in my taste and personality that I shouldn't attempt to spread over books outside that narrow laneway. So thanks again for your comment, which enriches my modest discussion of Burman's book and Swedish crime writing generally--not to mention extending the dialogue which is surely the whole point of doing a blog on books. And I have to say that your comments also persuade me to pay more attention to any future publications by Burman.
With much appreciation for your entire publishing program at Marion Boyars,
Glenn