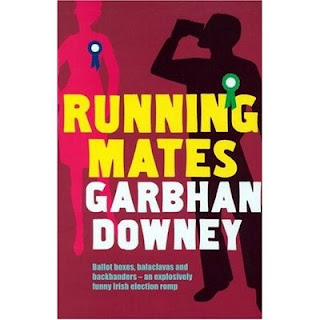 I'm having an Irish Christmas, in terms of reading material. I just finished Garbhan Downey's Running Mates and I'm starting Arlene Hunt's Black Sheep. But first, in honor of all the dark Scandinavian crime fiction we've all been reading this year (and the Wallander films in Swedish and in English that some of us have seen recently), I just rediscovered a film from 30 or 40 years ago that has a certain reckless charm. It's De Düve, the famous parody of Ingmar Bergman's Wild Strawberries and The Seventh Seal (you can see it on-line at various places, including http://www.bergmanorama.com/media/dove.wmv). Though Bergman did a genuine Christmas movie (Fanny and Alexander) and at least one horror film (Hour of the Wolf) along with lots of stories of crimes of various sorts, he was a noir-filmmaker only in the broader sense of "noir": but for a Scandinavian crime parody, De Düve will have to do for now (though as far as I can tell, there are only 2 genuine Swedish words in either the soundtrack or the subtitles). There's a very young Madeleine Kahn in it briefly. If anyone knows of Scandinavian crime comedies or parodies, please let us know!
Downey's Running Mates is satire, rather than parody, but very funny. It's technically a crime novel, I guess, since there is copious murder, but it's at least as much a story of star-crossed lovers (middle-aged ones). There are lots of references in it that non-Irish readers will find puzzling, particularly the calculations of political hacks regarding the Irish proportional voting system. There are also a number of characters who have shifted careers from terrorism to straightforward gangsterism, but all of them are so much fun to be with that we wish them no harm (and in fact most of the unpleasant characters fall foul of a certain murderer's attention). Satire isn't always funny, and good satire is a difficult trick--Downey manages both, and with enough plot to keep the whole thing moving forward through a series of conversations among various groupings of the politicians, gangsters, journalists, bartenders, etc.--at first it's a little hard to tell who's who or which ones are the important ones, but it all becomes gradually clear. Highly recommended. Happy Holidays to everyone out there in crime-blog-land!
Posted by Glenn Harper at 11:40 AM

That's an important shift in Irish life and, I think, in Irish crime fiction as well. I don't think anyone has as much fun with it as Downey does, though.

I also say the Bergman parody years ago, but I'm not sure I ever knew its title. Thanks for the reminder.
==============
Detectives Beyond Borders
"Because Murder Is More Fun Away From Home"
http://www.detectivesbeyondborders.blogspot.com/

Just saw this. Many thanks, Glen.