The Vampire of Ropraz, by Jacques Chessex 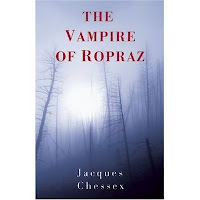 Based on a true story, The Vampire of Ropraz (published in English by Bitter Lemon Press with translation by W. Donald Wilson) is a hybrid of folk tale, allegory, literary Surrealism, and crime story. Jacques Chessex’s book shares some ground with Nosferatu (the first vampire movie), The Return of Martin Guerre, the Wild Child of Aveyron, Kosinksi’s The Painted Bird, the dark strain of French literature (the grotesqueries of Georges Batailles and Blaise Cenrars, who is not only cited in the book but becomes a character) and the crime novels of Fred Vargas (though her Medieval and foltale plots usually veer toward realist solutions before the end), and Friedrich Glauser (in the dark and atavistic countryside of several of his books, especially The Spoke). All of that in a mere 106 pages of large type, plus there’s a very large twist at the end. The story is fairly straightforward: In fairly quick succession, three women’s bodies are exumed in the night from their fresh graves and the bodies are mutilated and sexually violated. Casting around for suspects, the authorities seize upon a young man discovered in an act of bestiality with farm animals, and the young man becomes the center of public outcry (“Kill the Vampire”), legal proceedings, sexual fascination, and psychological study. He is ultimately sentenced to life in prison, incarcerated instead in an asylum, escapes, and dies in World War I as a soldier of the French Foreign Legion. The style alternates between documentary, poetry, and fictional narrative in reconstruction of, alternately, rough outlines of the story and intimate imaginings of fiction and dialogue. Altogether, the novel is a fast and intense experience, and no one should let the literary precedents and overtones put them off: Chessex never loses sight of the true story at the center of his narrative, and the spooky quality of the novel resonates with the core of human nature rather than with supernatural speculations. The final ironic twist, whether speculation or invention on the author’s part, carries the story out into everyday political and social experience. Several of Chessex’s other novels have been available in English for some time, but none had appealed to me—they appeared to be oppressive in theme and style. I’ll have to check them out now, but I have a suspicion that the germ of reality in The Vampire of Ropraz both anchors it in naturalism and intensifies the strange fascination of the story. If anyone can link this book to Chessex’s others, I’d love to hear.
Posted by Glenn Harper at 7:42 AM

I'm actually just looking for your mailing address Glenn, so I can send you some international noir, on the chance you might be interested in reviewing them?

My email is richard@softskull.com And sorry if I gummed up your site!