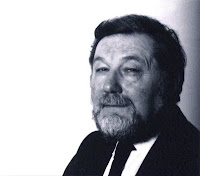 For forgotten books Friday: Bernard Share's The Finner Faction delineates the investigation of a World War II incident involving secrecy, spies, sex, and sand castles--it's definitely not noir, but is very funny (and gets funnier as it goes along). It was a paperback original, published by Poolbeg in 1989 (the author's name is a pseudonym for writer/historian/journalist Bernard Bolger). The Finner Faction shares (and puns become irresistible when quoting from or referring to The Finner Faction) something with the pseudonymous Flann O'Brien's fiction (it's a spy novel such as O'Brien might have written) and with Catch-22 (in its maze-like structure, its mixture of broad and indirect styles of humor, crash-landing airplanes, and both straight and comic sex, but without the bombs). The premise is that during Share's research for his history of the Emergency (published by Gill & Macmillan in 1978), he ran across a Fine Gael scheme to protect Ireland from Germany with a force composed of U.K., U.S., Irish, and French forces, led by the French, as well as two manuscripts that suggest a French agent landed at Finner during the war in pursuit, perhaps, of that proposal. The novel has a tripartite time structure (wartime Ireland plus approximately the years of publication of Share's Emergency book and The Finner Faction itself) and the narrative jumps between them unpredictably, seemingly as required not by the plot buy my the many tri-lingual puns, the plethora of ridiculous passwords in 3 languages (English, French, and occasionally Irish), and the author-narrators interviews with old geezers in pubs, with men and women who (might) have something to do with the men gathered together by the protection plan, and (possibly) the stories (real or imagined) of those men themselves, with guest appearances by General de Gaulle and his wife. It's perhaps the only comedy of Ireland's Emergency period (or of the historians of the period), with particularly Irish political comedy (suggesting the Myles na gCopaleen newspaper columns that are cited by Share in the novel) that I'm sure I'm not quite understanding but that is funny nonetheless. There is some spycraft (those absurd passwords, unexplained code names, doors removed from hinges, old notebooks that turn out to be blank) and also the craft of the historical researcher (lampooned for the most part, as in the narrator's task of filling in those blank notebooks with historically appropriate ink and handwriting). There are also carnivals, dogshows, and sporting events with iniosyncratic titles, and the putative spy cell "secretly" meets as two of the three members are entered in a sand-castle contest (they're appropriately enough building a maze). The historian/narrator is searching for "something that would lift my muddied fragments into the steady stream of coherence," as are we the readers, and Share finds something like coherence (and even a "thrilling conclusion" of sorts, featuring a gun and a knife) in his shift from fact into fiction, history into comedy.
Posted by Glenn Harper at 11:03 AM