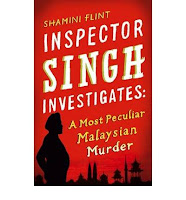 It's billed as the first of an "Inspector Singh Investigates" series, but A Most Peculiar Malaysian Murder is actually the second in the series, following Partners in Crime, reviewed here last year (from a different publisher). The new publisher(Piatkus), has announced what is apparently Partners in Crime under a different title (The Singapore School of Villainy), and apparently intends to emphasize the series detective by using "Inspector Singh Investigates" as part of the title of every book (making for a somewhat cumbersome title). While Partners in Crime had a slightly naive quality (especially in its lead character, a young female lawyer in Singapore, and it will be interesting to see if Flint takes the opportunity to revise the text under the new title), its Malaysian sequel is a much more assured outing for Inspector Singh, the Sikh detective who played a relatively minor part in the first book. The story moves forward in short chapters that are often linked by a theme or even just a word as the narrative shifts between the Inspector, who has been sent to Malaysia to uphold the interests of Chelsea Liew (a Singapore citizen married to a Malaysian man) who has been jailed for murdering her husband); Singh's Malaysian police counterparts; the accused wife; one of her children; and several other characters. It is to Flint's credit that the story remains coherent through all the shifts in point of view. There are a number of shifts in the plot as well, as first one and then another character comes under scrutiny as the possible murderer, and though some readers may guess before the end who the actual murderer is, a surprise ending is prepared for with some skill. The portrait of Malaysia is rather critical, as measured against the detective's (and the author's, as she is a Malaysian-born Singaporean) Singapore frame of reference, though there is also some critique of the police-state aspects of the island city-state's character. The story reveals that the author has not completely worked out her craft, since it doesn't move forward like the well-oiled machine of some more experienced crime writers, and Singh, though he does a good deal of investigating, doesn't have much to do with the resolution of the crime plot. In fact, his role in the ending hearkens back a bit to the more sentimental aspects of Partners in Crime. Still, Singh is a likeable and well drawn character, a less driven and more comic Sikh detective than was offered by Vikram Chandra in the much longer and more complex Sacred Games. And Flint's portrait of Malaysia is fascinating--particularly in a plot twist that reveals the country's theocratic underpinnings and catches Ms. Liew in a legal cul-de-sac with consequences that will be horrifying to those of us outside that religious and cultural orbit. All in all, a satisfying read, and a promising addition to the ongoing series (I already have the next volume, A Bali Conspiracy Most Foul, the recently published story that evidently portrays the infamous Bali bombing incident or a fictionlized verion thereof.
Posted by Glenn Harper at 12:04 PM