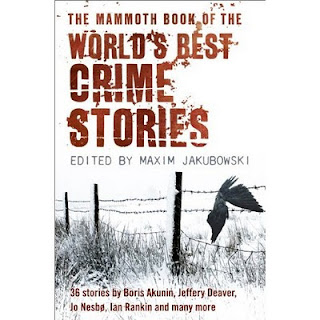 The Mammoth Book of the World's Best Crime Stories (in the U.S.) or Best International Crime (the U.K. edition) is Maxim Jakubowski's collection of crime stories from around the world. I don't know about "Best" but it's certainly "Mammoth," the brand of the series that it is a part of. I had high expectations for this collection, hoping to be introducted to many heretofore-untranslated crime writers from around the world. In the end, I was disappointed and, occasionally, irritated by the collection. First, the irritation: there is no biographical or bibliographic info on any of the artists, who are identified in the Contents only by country (and even that doesn't appear on the title page of the story, so that a reader has to constantly flip back and forth to the Contents to identify a writer by even that scrap of information).

Of the international writers who have already been translated, there are some stories that are disappointing (Jo Nesbø's in particular, in my opinion, which has a surprise twist but otherwise not much interest for me, And Camilla Lácberg's, which trails off in manner that suggests young-adult writing rather than crime-writing), and some that are definitely up to their usual standard, though brief (Dominique Manotti, Paco Ignacio Taibo II, Leonardo Padura).

But the gems I was expecting among the writers whose names I didn't recognize were few. The best story in the book (for me) is German writer Juergen Ehlers's "Elevator Obstructors," which is a sharp, funny, and vivid tale of an ex-con and his tribulations (and those of people who encounter him) when he gets out of prison. Italian writer Diego De Silva's story, one of the longest in the book, starts well but trails off into a sort of ghost story.

The length of the stories, in fact, may be the problem for me—short stories are a specific genre, they're not just short novels. A few of these stories, like Ehlers's, use the brevity and concentration of the form very effectively. Others seem drawn to cliches of the form, including the aforementioned surprise endings. I'm not much drawn to short stories, generally, and this collection didn't convince me to seek them out.

I'd be curious to know if other readers found this collection to be more satisfactory, though there don't seem to be many reviews in the blogosphere—perhaps a passive judgment on the reception of the book. I, for one, am still looking for an anthology that will open a window upon the world's first-class crime fiction (of which there is a great deal, considering the quality of translated novels that are making appearances in English these days).
Posted by Glenn Harper at 8:49 AM

You are so right about short stories being a specific genre. Very few writers do both equally well.

I don't read short stories these days though I used to do so a lot (not specifically crime). I do have a couple of collections at the moment, though not this one - if I end up with this one as well I know which to try first, thanks!