Marek Krajewski, The End of the World in Breslau 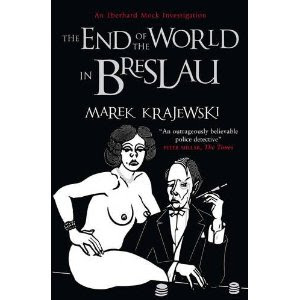 There isn't anything else in crime fiction quite like the Breslau series by Polish author Marek Krajewski, including the second book, The End of the World in Breslau, translated by Danusia Stok and published in English by Quercus. The most distinctive characteristic of the series is its main character, Eberhard Mock (other than the fact that it begins with the end of Mock's career and works backwards, at least for the three that have been translated so far). Mock is very interesting and very flawed, not a role model for anyone (police or otherwise). His career as a cop depends mostly on the blackmail material he has accumulated on politicians, policemen, and the good citizens of Breslau in the first four decades of the 20th century (Breslau became the Polish city of Wroclaw after WWII).

Mock also has a sadistic streak and a sort of alcoholic manic-depression. In The End of the World in Breslau he is married to a much younger woman, Sophie, toward whom he is alternately attentive and abusive. An extremely sadistic series of murders is taking place, tied to both historical events in the city and a current apocalyptic preacher, but though the crimes are vivid, Mock's pursuit of the murderer is intermittent and more oriented toward historical research than pounding the pavement in search of evidence, and the murderer himself is hardly a figure in the novel at all. Mock's methods of pursuing the criminals and discovering the truth are, as he himself recognizes, neither conventional nor up to legal standards.

The language and manner of the storytelling match the Expressionist content and Mock's own mental processes. There are frequent leaps and disjunctures in the story, and in the indirect, allusive, and sometimes scholarly prose there is considerable very dark comedy as well as narrative velocity. I'm tempted to delay acquiring the third novel in the series, The Phantoms of Breslau, because once I've read that one, I'll have to wait for the translation of the next one...
Posted by Glenn Harper at 10:27 AM

You knoiw, I really should read these. I've had many a good drinking session in Wroclaw. Thanks for that.