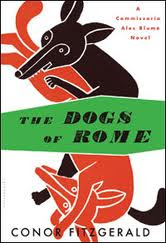 Halfway through, Conor Fitzgerald's Dogs of Rome shifts from a fairly straight police procedural (featuring a somewhat unusual cop--more on that in a minute) to noir/Elmore Leonard territory. It works very well, except for an ending that seems a bit tacked on (concerning a woman and a dog), though perhaps it helps set up the characters for a series. The lead character is Alec Blume, an American who was orphaned in Italy and stayed there. He's now a Commissario in the flying squad, and there is some cultural friction between the American and the Italians (peanut butter is a significant plot point). There's also a quite different tone (more Irish, perhaps, since Fitzgerald is actually an Irishman living in Rome, rather than American, giving the book a tri-national character) from contemporary Italian crime fiction. There are some kinds of jokes, some language, and that Elmore Leonard quality to the plot of the second half that give the story an international, if not specifically Irish or American, quality.

The story concerns a break-in resulting in a murder (events that the reader witnesses), assigned to Blume's team, but they are hedged in by political implications (the victim's wife is a politician and he himself was an animal activist). There is a TV documentary about dog fights (thankfully not depicted directly, though there is some animal cruelty), a connection to professional gangsters, and cops feeding information not only to the press but to suspects and crime lords.

There's also a knowing young girl (a victim's daughter), an FBI lawyer (and potential girlfriend for Alec), and lots of internal police politics. Some aspects are standard fare for crime fiction, but overall the tone and style are fresh, whether compared to the Anglo-American or the Italian realm of crime writing. Of the several books I've read (or heard) recently, this one was the best written and the most fun to read.

Which cover do you prefer? I like the graphic one, though photos of Rome are never a bad thing.
Posted by Glenn Harper at 7:49 AM

I've been umming and ahhing over this. Picked it up a couple of times in the bookshop. You've probably nudged me over the line to try it.