The Tourist (no not the movie) 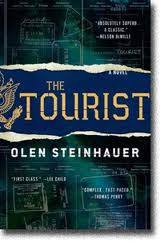 I'm hoping to do some catching up over the next few days, and to get back to posting more regularly. To start with, I recently heard the audio version of Olen Steinhauer's The Tourist, a spy novel unrelated to the recent (poorly reviewed) Hollywood movie. Steinhauer's tourist is a member of a secret black-ops CIA team based in New York (each member is called a tourist, the department is called tourism, etc.). Steinhauer is very good at depicting the characters as human (rather than as types), and he gets an effective sense of the gray moral areas of the contemporary spy trade. There's even some sly humor. But as a reader who has grown to expect the spy thriller to have a clockwork-like structure that surprises with its final but (looking backward) revelations, I didn't quite get what I wanted from The Tourist (there's a sequel that's well-reviewed--maybe I just haven't reached the end of the story yet). And maybe The Tourist suffers from my having read Mick Herron's Slow Horses first--that's a book that delivers the clockwork structure, the surprise, the irony, and considerable humor.

Milo the tourist has a fateful encounter in Venice, just before 9/11/01, in which his mentor is killed, and then time shifts forward to 2007 when Milo, now on administrative duty, is thrust back into black ops by the appearance of an assassin he has been tracking. But it's not the assassin that provides the tension, it's the consequences within the Department of Tourism, the CIA, and Homeland Security (as well as Milo's own family) that provide the impetus for the plot.

I liked this better than I liked the one of Steinhauer's East European novels that I read--and it provided enough interest and entertainment to get me through a 12-hour drive that I needed to make. It just didn't excite me in the same way that Slow Horses did when I first discovered it. Anyone read the sequel, The Nearest Exit? Does it provide completion for the story?
Posted by Glenn Harper at 10:56 AM

I liked 'The Tourist (no, not the movie)' quite a lot, but then I'm usually a real sucker for that whole the-world-is-a-grey-area kind of thing in spy novels. 'The Nearest Exit,' however, was a major disappointment for me.

Yes, I know the reviews were generally quite good and the hype on Amazon was relentless, but the narrative was simply too muddled to hold my interest. Where 'The Tourist' was grey, 'The Nearest Exit' was merely opaque. I can do muddy as well as the next man, but there has to be at least enough internal consistency and illumination in the narrative to make me want to follow the string and see where it takes me. By the time I was halfway though 'The Nearest Exit,' I realized I had simply given up on Milo and, as they say, lost the plot. I abandoned the book right there, although I almost never do that. A major disappointment.