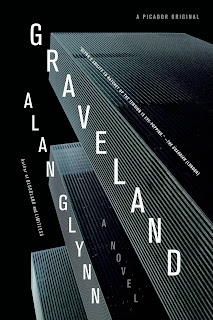 Alan Glynn's new novel, Graveland, not only takes up where his most recent novels, Winterland and Bloodland, let off--it also takes up a theme of his first novel, The Dark Fields (made into the movie Limitless). I don't usually review U.S.-set crime fiction here, but since Graveland (set in New York City and upstate New York) is the third novel in a trilogy, and the first two novels are either set almost entirely in Ireland (Winterland) or mostly there (Bloodland), I'm making an exception.

Graveland doesn't continue the story in any literal way (as is the pattern of this trilogy): he simply uses characters that overlap the boundaries of the novels in various ways. The main character of Bloodland, Jimmy Gilroy, an Irish journalist, is a minor character in Graveland, and his mentor in the earlier novel, New York journalist Ellen Dorsey, is one of the main characters in the new book. In addition, the character who looms in the background of the first two books, the shadowy American financier and kingmaker James Vaughan, becomes even more prominent in Graveland.

The plotting of Graveland is one of its most interesting aspects. As in a lot of thrillers and crime novels (Graveland partakes of both modes), there are several seemingly unrelated plots at the beginning. An unemployed and divorced architect, Frank Bishop, languishes in a suburban retails store (selling high-tech game equipment, among other things), and is unable to reach his college-age daughter. On the heels of the world financial crisis, an investment banker and a hedge-fund manager are murdered on the street in New York. Vaughan is seemingly about to hand over the reins of his secretive private equity firm to his second-in-command, who's puzzled by both his boss's retirement and his health situation. And Ellen, who has turned her work on the failed presidential candidacy at the heart of Bloodland into a series of articles, has a nagging suspicion that the official story of the financial murders is incorrect.

Readers know in advance that these stories will come together. But Glynn keeps the plot fresh by seeming to head toward one sort of thriller plot and then veering off into something else. The shifts and surprises continue until well into the novel, and affect all the intersecting stories. An astute reader will figure out the final twist before the narrative makes it explicit, but not much before, and that reader will be pulled forward even more by the awful inevitability of what's going to happen.

Glynn keeps things moving rapidly forward, using dialogue and internal monologue rather than a more narrator-centric mode, keeping the story fresh and lively in the process. I found myself racing through the book's 383 pages. The resolution of the story not only ties up Graveland's plotlines, it also makes a fitting conclusion to the whole trilogy, without making any tedious attempt to replay the stories of the first two books, through Gilroy's brief appearance and the playing out of the Vaughan story. Winterland is about developers and politicians, Bloodland is about politicians and journalists, and Graveland is about financiers and journalists: but the whole set is really about money, and the pervasive and corrupting influence it has on contemporary life. If that's a lot for a few crime novels to carry, Glynn does it with flair, humor, and efficient but elegant writing.
Posted by Glenn Harper at 1:22 PM