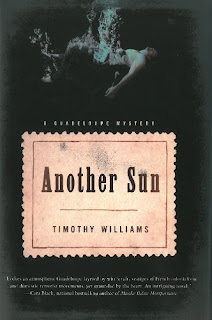 Timothy Williams's Un Autre Soleil, published in French in 2011, has finally arrived in English as Another Sun. Williams is the author of the excellent series set in Italy's north, featuring Commissario Trotti (and I hope that with the arrival of his new series, the Trotti novels will be brought back into print for new readers, along with the so far unpublished sequel).

Another Sun is set on the French island of Guadeloupe, in the Caribbean. The novel has classic elements of noir, including conflicts of race and family, hints of incest and jealousy, murder and unjust imprisonment, and so forth. But Williams's distinctive style carries these elements forward into something new.

Algerian-born French judge Anne Marie Laveaud has transferred to the French West Indies with her husband, a native of the island, and their young son. She is assigned to the case of a plantation-owner evidently shot to death by a man recently returned from imprisnment in the notorious prison islands that France maintained in South America. But Anne Marie doesn't believe that all the facts in the case are clear, and she ignores repeated pleas to forget the case.

Four factors that the Laveaud story shares with the Trotti books keep the reader on edge. One is the characterizations, which are sharp and particularized. Another is the dialogue (through which most of the story is carried forward): characters frequently talk past and over one another in a realistic indirectness that is frequently funny and sometimes frustrating (in a way that mirrors for the reader the frustration of Anne Marie in discovering the truth behind the case's facade). The third is the plotting, which always moves forward indirectly and toward unexpected directions.l Several times, we think we know what's going on and who killed the planter, always (until the end) nevertheless in the dark. And the social milieu is fully realized, including social and political realities that the characters themselves frequently seek to obfuscate.

Laveaud is more tenacious than her superiors expect, or want, her to be, and she discovers in the end a capacity for realism that her previous idealism has obscured. The full conclusion of the case and her new realism is left somewhat hanging, but not in a frustrating way. We may not know exactly how everything is playing out (and we may or may not discover more about these facts in the sequel, presuming and hoping that there is one), but Laveaud's presence as a personality provides a satisfying close.

The social aspects of the book include investigations of conflicts of race, revolution, colonialism, local and national politics, and New World vs. Old World worldviews. If that seems like a lot for a crime novel to carry, it's always in the service of the story and in the voices and attitudes of the characters. The book is quite different from the Trotti novels, despite the overlapping sensibilities, because Guadeloupe is quite different from Italy and Laveaud is not Trotti's female counterpart. Another Sun is a distinct, involving, and entertaining addition to the top rank of crime fiction.
Posted by Glenn Harper at 12:19 PM

When is it set?

Good point, I should have mentioned that it's set in 1980. Each of the Trotti books was set in a very specific time of Italian history, and this book too hits a specific spot in the history of Guadeloupe, marked by separatism on the one hand and clinging onto colonialism on the other.