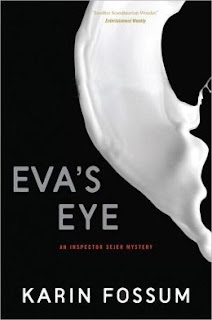 Karin Fossum's series featuring Inspector Sejer (in a small city in Norway) has been one of the most consistently outstanding of the Scandinavian Crime Wave. We finally have the first book in the series, translated from Norwegian by James Anderson, and in this case reading the story out of order is no burden. We get a little more of Sejer's backstory, but as is often the case with this series, we spend more time with the people involved (in one way or another) with the crime than with the detective. We also see a wider assortment of police on Sejer's team, which has been reduced in later books mostly to his assistant, Detective Skarre (who appears here in a minor role).

The tale begins with the discovery of a body, when an artist named Eva Magnus is out walking along the river with her daughter. Oddly, Eva pretends (to her daughter) to be calling the police while actually doing nothing to report the discovery.

As Sejer works to find the identity of the dead man in the river, he comes across another case with certain overlapping elements, concerning the death of a woman named Maja. So we have two deaths and a single mother and artist who is acting guilty--most of the novel is occupied in bringing to light the connections among these elements, first by following Sejer's investigation, alternating with Eva's daily life as a painter and divorced mother who is suddenly and inexplicably able to pay her past-due bills.

Sejer pays several visits to Eva, resulting ultimately in a long flashback to a time when the two murder victims were still alive and Eva was struggling to get by. The flashback is told in a third-person narrative, but it is set into the novel as her story, as told to Sejer. Fairly early in that narrative, the picture begins to come into focus for the reader, but Fossum is very good at keeping us engaged, as things become clear--and also very good at upsetting our assumptions after we once again join Sejer in the "present" of the novel.

Eva's Eye must have been a very auspicious beginning for the series, for those able to see it when it came out. There are some details of daily life that date the story, but Fossum's concern is with the characters, whose lives and options are fully contemporary. She is particularly apt in her portrayal of Eva, both as a mother and an artist who is convinced (against all evidence) that she is a great artist (a hubris that seems to be required for anyone to continue in that calling). Black Seconds remains my favorite of the Sejer novels so far, but I would currently rank Eva's Eye a close second.