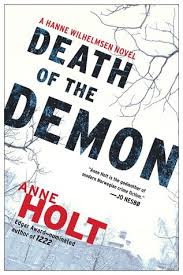 It's hardly possible to imagine two crime novels as far apart (yet still in the genre) as Anne Holt's  Death of the Demon and Massimo Carlotto's At the End of a Dull Day. Everyone in Holt's book reaches out for the reader's sympathy; everyone in Carlotto's is deeply flawed and basically (to anthropomorphize) could not care less what the reader thinks of them. Both deal with delicate subjects (homosexuality, the child welfare system, and damaged children as well as murder in Holt's book; sex slavery, corruption, murder and domestic violence in Carlotto's). But Holt deals with the delicate subjects delicately, and Carlotto throws them naked in our faces. The trouble is, as despicable as we may find all the characters and the deeds contained in it, Carlotto's is a better book (though perhaps only for those with a devotion to noir).

Death of the Demon, translated from the Norwegian by Anne Bruce and published in the U.S. by Scribner, is in Holt's Hanne Wilhelmsen series (I believe it's the third or perhaps fourth to be translated from this series). Hanne has recently been promoted to a leadership position and is finding it difficult to step back from actual police work (learning that lesson is a big part of the book). The book begins with a long section about the arrival of a "new boy" in a group home run by the Salvation Army for children of troubled homes. The new boy, Olav, is very large and perhaps brain damaged at (or before) birth. He has problems controlling behavior and emotions, and we see a good deal of the book through his eyes. As he adjusts to his new life (or doesn't adjust) an event throws everything into chaos: the director of the center is murdered. Olav disappears (and is on the run for much of the book, though no one thinks he's the murder--since he's 12). 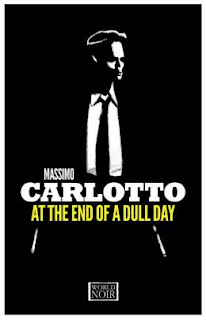 Hanne and her team spend most of the novel going back and forth among the staff and various other involved parties, making little progress until the end (which, by the way, I didn't find very convincing). The book is a traditional mystery, oriented toward the accumulation of evidence and the unveiling of the perpetrator. One of the distinguishing features of the series is Hanne's difficulty in acknowledging her ongoing homosexual relationship with her life-partner (not a cop), something that doesn't quite cohere with our idea of the liberalism of Norway,

At the End of a Dull Day (translated by Antony Shugaar and published by Europa Editions in their new World Noir series) is about Giorgio, who is a monster. He's a reformed terrorist and gangster, if by reformed you mean a restaurateur who also runs a prostitution ring involved in sex slavery as well as catering to corrupt politicians and abusing his wife (he's a control freak). We have met him before, in The Goodbye Kiss. He is double-crossed by his bookkeeper and most of the book is about him getting deeper into trouble and finally working out his revenge. He is casually violent, and dominates not only the other characters but (in an extreme way) his wife and mistress. And we see the whole book through his eyes.

But he gains some sympathy by not being in the Mafia (in any of its guises) or actually being a corrupt official, the two poles of the novel. The book is in many ways a dark commentary on Italy today. It also looks back to the roots of noir in books like Jim Thompson's The Killer Inside Me, and Giorgio mentions that his favorite TV series is Justified. Carlotto totally inhabits Giorgio and his world. The book is written in the swift, no-nonsense style of first-person noir and is a considerable achievement in that genre. But not for everyone, obviously.
Posted by Glenn Harper at 11:18 AM