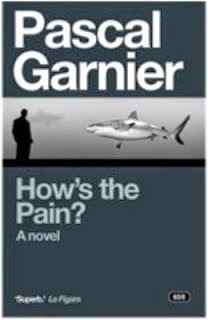 Gallic Books has lately been bringing out a series of novels by French noir writer Pascal Garnier, whose voice is very distinctive. It's not too much of a spoiler to say that two of them (The Panda Theory and How's the Pain, end and begin (respectively) with suicide of a sort, and that what follows or precedes the death is a frequently funny (in a deadpan manner) journey through the author's dark imagination but at the same time a closeup view of ordinary life.

How's the Pain is about a hitman at the end of his life, suffering through the mishaps of a final job. He sort of adopts a feckless small town young man as a driver, but other characters accumulate along the way until there is a sort of ad hoc family gathered around the professional killer (family as a need that can be met with the help of strangers is an aspect of both these books). There are a number of deaths. some of them quite dramatic (such as the one alluded to in the cover art) and some quite straightforward. The prose is very direct and the book is short, probably just as well since the story is a dark ride through the human miseries of daily life). Though there's plenty of darkness, there's also a glimmer of hope in the outcome. 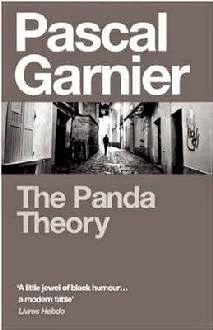 The Panda Theory holds out perhaps a little less hope, or perhaps hope of a different kind. For most of the novel, we follow Gabriel in two time frames, flashbacks of the difficulties of his life  and a current narrative of his very ordinary daily experiences in a Breton village that he is visiting seemingly for no particular reason. Gabriel is very helpful to a number of residents of the town, without expecting much in return: often exhibiting a particular talent for cooking meals with minimal supplies or equipment.

But the final favors that Gabriel bestows veer into a philosophy of life that is very dark indeed, based on where happiness and rest are to be found or not found. The end is a bit of a twist but affirms or extends Gabriel's view of life in an unexpected way.

Garnier, who is no longer with us, writes in a manner that is particularly French: his countrymen have often used noir fiction and film in a philosophical and psychological manner more than the sociological style of noir in some other countries. But Garnier's narrator is always somewhat distanced from the story, supplying details but not offering commentary. The philosophy, the humor, and the impact of the stories is instead in the dailiness of his characters' migrations among life's meager pleasures and deep miseries--always in a compelling, even fascinating manner.

The covers and overall design of the series are as understated and effective as the novels they contain, with an elegance one can feel as well as see--reaffirming that there can be physical as well as mental pleasures in reading an actual book that are not possible with digital formats.
Posted by Glenn Harper at 11:13 AM