All the Things You Are: A departure for Declan Hughes 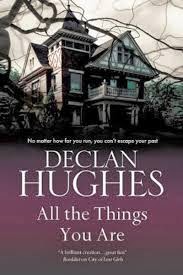 I must confess to being a bit befuddled by Declan Hughes's new book set in the university town of Madison Wisconsin. Not because of the change of setting from Hughes's earlier books, but because of the change of form. The previous novels form a private detective series self-consciously referring to Ross MacDonald (among others), and carrying that form successfully to contemporary Dublin (a setting meticulously realized).

All the Things You Are is instead a psychological thriller, with a very promising beginning. Claire, a middle-aged housewife who some years earlier left behind a not-so-promising career in the Chicago theater world to marry and raise a family in Madison with a college sweetheart, arrives back home from a midlife-crisis trip to Chicago to find her family missing, all the furniture (seemingly) in the house removed, and the family pet murdered. There is a hint of a private message (in the form of a statuette remaining on the mantle) that keeps Clair from simply declaring the husband a kidnapper.

But while the mystery remains, in various of its aspects, the energy quickly dissipated, for me. The reader discovers some of what's going on rather early on, in sections from points of view other than Claire's, and another mystery, from her husband's youth, begins to take over. By the time the police investigation kicks into high gear, on the one hand, and an Irish hitman, a refugee from the IRA, comes on the scene, Hughes had pretty much lost me. It's partly, I'm sure, that I'm more a fan of the Ross MacDonald influenced genre than the genre of, say, Sophie Hannah, whose work this book in some ways resembles. Hannah, though, seems to me to keep the tension of the central mystery torqued up for much longer.

My problem is also with the setting. I'm sure that (especially for an American) the U.S. college town is less evocative than Dublin, but the setting never really takes on a character of its own here--except as the setting for the family taproom, and even that rather important site is not really evoked in any detail. Others fonder of this sort of thriller will certainly find more to like than I'm suggesting in this review, but I'd be more interested in another Dublin detective story than another Madison thriller from Hughes.
Posted by Glenn Harper at 1:33 PM