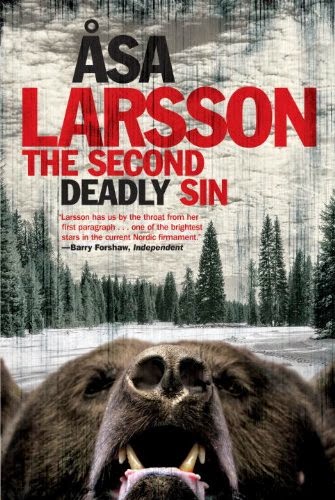 Dogs have been an important element in Åsa Larsson's Rebecka Martinsson novels before, but in the newly translated (by Laurie Thompson) The Second Deadly Sin (due out in the U.S. this summer) the dogs are more fully characterized than some of the important human characters (and one of the dogs will ultimately be the subject of a crucial and very affecting plot point late in the book). Among the characters who get shorter shrift are the husband of Anna-Maria Mella (the police detective in this series, set in Kiruna, Sweden's most northern city) and a shadowy figure who becomes one of the primary suspects.

The book begins with a bear attack but quickly shifts to the murder of a woman who lives alone with her grandson (who has disappeared). Rebecka is assigned as the lead prosecutor on the case but is quickly relieved of her post by a jealous colleague (and that colleague and his jealousy are a key element in the story). Another thread of the tale goes back to the beginning of the 20th century, to the founding of Kiruna by mining interests: a young woman arrives to be the teacher in the mine-supported school, and is met and courted by the mine's director, who is actually a historical character, the man who is credited as the founder of the city.

The jealous prosecutor is so totally defined by his mania to destroy Rebecka that he ceases to become a fully realized character, and the villain in the historical tale (the mine's manager) is so totally "Simon Legree" evil that he, too, is a cartoon rather than a character. It's a shame to waste two such potentially interesting figures, and their thin-ness takes away from a pair of interesting stories. The historical thread not only fills in the family history that will ultimately lead to the present-day murder but also gives an interesting portrait of not only the northern frontier town but the class and culture struggles of Sweden as a whole around the time of World War I (when the country was neutral rather more for commercial advantage than ideological purity).

In the present-day story, Rebecka takes advantage of the fact that the murdered woman's family has endured a number of sudden deaths in recent years to conduct her own unauthorized investigation, uncovering the deadly avarice that is the mortal sin of the title ultimately. Rebecka's nearly animistic connection to her natural surroundings is only an occasional factor in the narrative, a marker of the isolation caused by the traumas delineated in earlier books in the series as well as her uneasy relationship with her former boss and her former urban life, in the job she left to come to Kiruna (which might be the only route back into a life with her lover). A possible love interest who is resident in the north is a police dog handler who has shown up in previous books, a gentle but terribly disfigured man more comfortable with his canine colleagues than the human ones.

Though the book does carry the series forward in interesting ways, to me it's not the strongest of the Martinsson series, and is definitely not the place for a reader to start (the first two of Larsson's novels deal with a subject not often focused upon in other Swedish crime novels, religion, in interesting ways, and the introduction to Martinsson and other characters in these and the other two subequent books is really necessary to follow what's going on between the lines in the new book.
Posted by Glenn Harper at 9:10 AM

I agree with your take, Glenn. I didn't feel this was the strongest in the series, either. Having said that, Larsson is still on my auto-buy list.