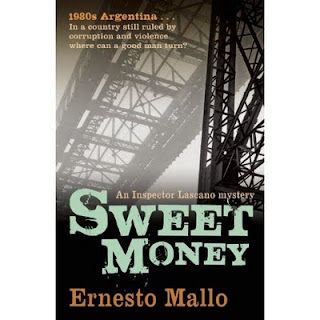 The sequel to Ernesto Mallo's remarkable Needle in a Haystack, Sweet Money, is scheduled to be published in the U.S. in October, in a translation by Katherine Silver (published by Bitter Lemon Press). Every reviewer of Needle in a Haystack remarks on the surprising fact that there could be a sequel, since "Perro" Lascano, the central character in what we are told is a trilogy, lies dying in the gutter at the end of the first novel.

But Mallo is not engaged in the kind of magic or comic realism that characterizes the life-after-death of the central character of the detective novels of Paco Ignacio Taibo II of Mexico. Mallo's detective is nursed back to health under the protection of a dishonest but wily policeman who is arranging to become the chief of police in Buenos Aires after the end of the military government--and who needs an honest cop like Lascano. But just as Lascano is achieving his recovery, his mentor is shuffled off the stage by a cabal of corrupt police who not only don't need Lascano, they target him for murder.

At the same time, a smart bank robber is released from a prison and follows a plan for his future that quickly falls apart, leaving him in need of cash. His solution is a robbery that has several unfortunate aspects, including a killing, an arrest, and the hidden source of the money stolen. Lascano, hiding from the police, is offered a lot of money to find the surviving robbers and the money before the police do. Lascano needs the money to escape from the police who want to kill him but also to find the woman who got away, his lover from the first novel.

The style of the writing in the series is direct and straightforward, with dialogue presented in blocks of italicized text, with no indication of who is speaking. A reader quickly gets used to the odd presentation of dialogue, and immersed in the multiple pursuits that make up the plot. The charactrers and the story are quickly but vividly drawn, but what Mallo is after isn't so much plot and character as a wider portrait of a society so poisoned by the violence of the military dictatorship (portrayed in Needle in a Haystack) that the new democracy is characterized less by freedom than by greed and corruption. A pervading theme is the kidnapping of dissidents' children, "adopted" by members of the ruling military.

Sweet Money is a grim but not heavy story. Mallo makes us care about the characters and about their shattered social milieu. And the blow that Lascano receives at the end is a final twist that, again, makes a sequel seem unlikely and at the same time inviting.
Posted by Glenn Harper at 10:52 AM