The Rage, by Gene Kerrigan

Irish crime writing was already booming before the economic bust in that country, but the collapse seems to be supplying even richer material for the writers there. The gritty realism of Gene Kerrigan seems to have anticipated bad times, as if his style of noir has only now found its proper environment.

His new novel, The Rage, is a very good book that very effectively evokes the decline in the Irish economy and sense of national identity. Bob Tidey is a detective who is determined to the right thing for the victims and their families, and his efforts lead him into a professional and personal quagmire. Vincent Naylor, recently released from prison, is a hard man who's trying to control his impulses, not to go straight but to make the risks of his actions match his possible gains, especially in the complex and daring robbery he has in mind.

The strength of Kerrigan's writing is that the cop and the thug, not to mention Tidey's obstructive bosses and Naylor's criminal associates, are fully human. Tidey struggles with his duty and his conscience and his relationship with his former wife. Naylor struggles with his anger, his impulsive older brother, and his sense of justice (which is fueled by the rage of the book's title). Naylor seems on sounder footing in his relationship to the new woman in his life, a better match than he deserves. One minor character who is essential to the plot, a nun, gets more and more complex as the story goes along, drawing in the traditional virtues (some of them no longer seeming so virtuous) and recent failings of the Irish church. She in particular could have been less interesting and more of a bit player in the hands of a lesser writer, and sh adds a lot to the depth of the story. 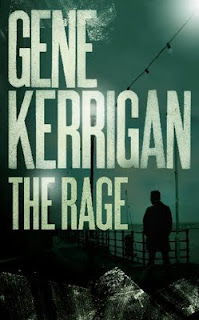 The plot is subtle and thoroughly believable, with a lot of killing but without using death as a casual plot device. I've been a fan of Kerrigan's since he started writing fiction (I haven't read his nonfiction crime writing, but I understand it to be highly regarded), and like Maxine over at Petrona-land, I found his third book, Dark Times in the City, to be very good but not quite as darkly effective (emotionally and dramatically) as his first two novels. But The Rage is very good indeed, and I found in it some of the grim poetry of the first two books (which Maxine found less evident in this book), as well as a very original approach to crime writing, responsive to both the demands of storytelling and the truth of a realistic portrayal of a very specific social milieu.

I'm pasting in two covers, the one that seems to be the official Harvill Secker cover and one that seems to be an alternate (it shows up only on a couple of Australian sites—perhaps an official Aussie cover?). The Aussie or alternate one is closer to the actual story, but the official one is more tensely ambiguous. But neither really evokes the power of the story that they purportedly depict.
Posted by Glenn Harper at 5:24 PM

Great review, Glenn, and thanks for the kind mention! Like you I like both covers (my copy was the blue one but I quite like the relative quietness of the green one). Kerrigan does write so well, very much a favourite of mine.