Norwegian noir: The Shadow in the River, part 2 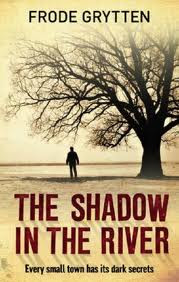 The Shadow in the River, a 2005 Norwegian crime novel by Frode Grytten, is classic noir with a wry edge. It could almost be Chinatown, with the incest changed to adultery and the water rights manipulation motivated by development changed to industrial theft motivated by globalization (there's even a sly reference to the movie). It's a Jim Thompson novel with a political theme (the same racism and xenophobia recently used as an excuse by a deranged Norwegian nazi) and a bit of Samuel Beckett's absurd comedy.

Grytten vividly evokes a grim post-industrial landscape and its citizens (some winners but most losers as their town dies). The narrator and central character, Robert Bell (I wonder if the anglo name is itself a noir reference) is the pessimistic wise-cracking anti-hero of noir, this time a reporter on the verge of losing his job rather than a down-and-out detective.

The plot is not complicated. A young man has drowned in the river, his car forced off the road. He had been fighting with some Serbian immigrants, and everyone is happy to assume that the foreigners are guilty of the crime. In the first half of the novel, Robert lethargically investigates the crime, which has attracted national attention, while occasionally seeing his brother, a police detective, around town and in press conferences.

The brother finally appears directly in the second half, first to ask Robert to accept a TV station's invitation to appear on a news show to discuss the investigation from their different points of view and then to confront Robert about the fact that has become the central tragedy of Robert's life: he is in love with, and having an on-again off-again affair with, his brother's wife.

There's murder, racial hatred, adultery among brothers, plus blackmail, manipulation of the town industry's bankruptcy…plus the worldy and wry voice of the narrator—all the elements necessary for first-class noir. Plus an element of the absurd in both the plot and Robert's attitude, as well as globalism, to bring the story up to date.

Grytten has written a series of short stories based on Edward Hopper paintings, certainly a noir topic, but no other crime fiction that I'm aware of. I had been putting off reading The Shadow in the River because I'd read reviews that made it sound grim and self-consciously “literary,” but the book is winning in its style and its development of the noir form. If you're in the mood for something dark but funny, downbeat but vivid, I'd highly recommend it.
Posted by Glenn Harper at 3:29 PM

I reviewed this book a couple of years ago for euro crime when it came out in the UK. I really liked it, though the ending was a bit disappointing. I especially liked the Odda descriptions/setting, and the racism elements.