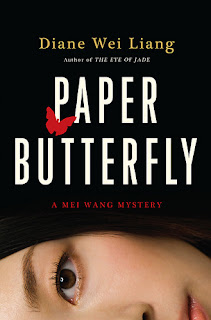 The followup to Diane Wei Liang's The Eye of Jade from a couple of years ago is a more assured novel, but retains the mixture of family, politics, and melancholy from the first book. The blurb on the U.K. paperback, "Bridget Jones meets Val McDermid," has some truth, and in the early chapters I though Bridget Jones was coming out ahead. But when private detective Mei Wang (who can't call herself a private detective since that profession is illegal in China) begins a new case, searching for a missing singer/actress, the story gets more serious about its status as a crime story. The tone of the novel has something in common with another Chinese emigre crime writer, Qiu Xiaolong, and perhaps it is the approximation of Chinese culture and speech that is the source of the similarity. 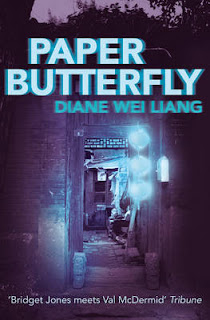 In the work of both, characters speak in a somewhat literal and stilted style, quite unlike Western dialogue, particularly in the hard-boiled detective vein. Once the reader gets used to it, the style is not distracting in the case of either author, though. Liang participated in the Tiananmen events in Beijing in 1989, and her books are colored by the massacre and subsequent crackdown. In Paper Butterfly in particular, Tiananmen lies behind the characters' stories and motivations. In addition to Mei's investigation into the missing starlet, a second narrative concerning a young man sentenced to hard labor after Tiananmen threads through the book, finally joining the other story in an unexpected way and providing the somewhat downbeat but not pessimistic conclusion. The second Mei Wang book is altogether more satisfying than the first, and holds the readers interest very well in the several sittings it takes to consume its fairly short (by current standards) length.
Posted by Glenn Harper at 12:47 PM

Interesting review, thanks. I have recently read the debuts of this author (The Eye of Jade) and the other one you mention in your post. Qiu Xiaolong (Death of a Red Heroine). Although there are similarities, I think Diane WL is much lighter than QX - and shorter. I felt the mystery element of Eye of Jade was hopeless, but the characters and the sense of life in China (and the past) was very well done. Death of a Red Heroine could have done with being 100 pages shorter - frankly I am more inclined to read more of Diane WL than Qiu X because of the sheer length and time investment required for the latter - the book was good but not "that" good - it was pretty meandering and the detective missed some very obvious clues that set us back 100 pages about 3 times.