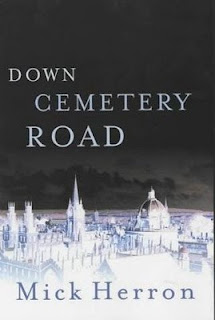 I liked Mick Herron's most recent novel, Slow Horses, a lot and have been looking for more of his writing. I found Reconstruction at the local library, and though I didn't like it quite as much as I did Slow Horses, it was very good. So I thought I should go after his other books in order of their writing, partly because the first three are a sort-of series. The first, Down Cemetery Road, begins with a prelude suggesting a conspiracy novel, but then shifts into a very funny satire of suburban life in Oxford, beginning with a dinner party hosted by Sarah and Mark with guests including a hippy-esque couple with ridiculous names and an obnoxious plutocrat whom Mark is courting as a customer at his investment bank. The dialogue at this mismatch of a party is nasty and funny, up until the explosion. It's hard to guess how much of the plot to give away from that point forward--it's really better to know as little as possible of what is to come, in order to enjoy the twists and turns that the author is going to take you through (my advice is not to read the blurbs or intro copy on the dustcover, just dive into the book). Though there are some spoilers in it, the best description of the book that I've seen is in a Shotsmag piece by Herron on the source of his plots (see here). As Herron says there, Sarah is the center of the novel, and he's very good at getting into her head (the narrative is in the third person, though, and does stray beyond Sarah's point of view). The story shifts from domesticity with violence and private detectives (initially seeming something like Kate Atkinson's detective novels in both the quality of the writing and the lightness of tone) to something like Christopher Brookmyre at his best. Plus there is a vein of spook-fiction in everything I've read by Herron so far, post-cold-war spy games of a very entertaining and pointedly skeptical order. I'll be going fairly quickly to his second novel, already in hand, and the third and I'll report on them in due course. But judging from the three novels I've read, and the first in the sort-of series, Herron is a major writer of considerable wit and talent who should be better known.
Posted by Glenn Harper at 1:23 PM