Why We Die, by Mick Herron 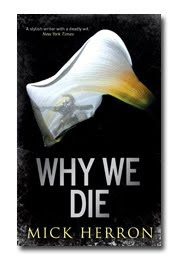 Why We Die is the third of the four Zoë Boehm novels by Mick Herron. Each of them (so far) is quite different. In the first, Down Cemetery Road, Zoë is not at the center of the action (which shifts from comedy to thriller), and in the second (The Last Voice You Hear), Zoë's somewhat morose inner voice sets the tone for a story that is ruminative until it, too, shifts into thriller territory (though with cops rather than spooks as the active agents in the shift). Why We Die has a good deal of meditation on death, as the title implies, but embedded in a story that combines Daniel Woodrell with Elmore Leonard. Zoë is still working (somewhat reluctantly) as a private detective and takes a case that she would rather turn down mainly because she suddenly owes back taxes. A jeweler has been robbed and wants her to find out who the robbers are rather than going through the police, since what was stolen was itself stolen property. Following the trail leads Zoë to a fence and his unusual driver and a trio of foster-brother-thieves, one of whom (the brains of the trio) is married to Katrina, who will play a larger and larger role in the story as it goes along (as will the crossbow that is the preferred weapon of another of the brothers). In pursuit of the brothers, and their money, there are numerous hair's-breadth escapes from death and several shifts in the story, all motivated by the personalities involved: the importance of character and the twisty story are very Elmore Leonard-like, with an overlay of the ruminations on death (which are not very Elmore-like). This is a very clever crime novel and the plot moves along much more quickly from the start than did The Last Voice You Hear. I've grown in the last few months to be fan of Herron's quirky style, and it is with some regret that when I get hold of a copy of the 4th Zoë Boehm book I'll not only be caught up with his published books but it will be the last of Zoë.
Posted by Glenn Harper at 9:34 AM