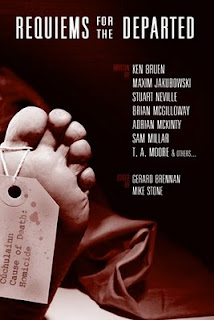 All storytelling relates in some way to the old stories, the myths and legends of a culture, and crime fiction in particular frequently has a clear relationship to the violence, fatalism, and darkness of some of the old stories. A new anthology of crime fiction, Requiems for the Departed (edited by Gerard Brennan, of the Crime Scene NI blog, and Mike Stone, forthcoming from Morrigan Books) takes full advantage of that relationship by linking the collection together with a thread of Irish myth. Each author explains the background to the story (and in most cases the particular myth evoked is pretty clear, so no worries about having to know all about Irish myth), and as the introduction makes clear these are not (for the most part anyway) “supernatural” crime stories, not even in the metaphysical/metaphorical/psychological sense of Stuart Neville’s The Ghosts of Belfast. A few of the stories at the center of the collection are set in the era when the myths would have been current (and one, Dave Hutchinson’s tale of cops, clans, and linked distopia/utopia, is set about a generation into a bleak future—as well as in a place beyond time), but most renew the stories in modern contexts. And make no mistake, these are not fairy tales, they’re the hard stuff (both on the mythic and the contemporary end of the timeline), though some of them have comic touches. Neville’s story is one of the best in the collection, linking contemporary life to myth through universals of human emotion and behavior in the form of a tale of gender and crime-gang dominance.
The god-in-the-machine lying behind several stories is the no-longer-quite-contemporary one of the IRA and its politics and violence. Adrian McKinty’s tale is a particularly bleak evocation of the smoldering remains of this Irish history, told in terms of the much older story of Diarmuid and Grainne. A number of the stories, like T.A. Moore’s hard and fast tale of honor among thieves, are told from within the world of drug and crime gangs, others are told from the point of view of cops (such as one of the more supernatural stories, Tony Bailie’s tale of hermetic clues and mythic revivals). Only one, Sam Millar’s serial-killer re-evocation of the story of the Red Hand of Ulster, is a hard-boiled private-eye story. Horses and dogs figure in several of the stories. Arlene Hunt’s racehorse story owes as much to O. Henry as to Irish myth, but is anchored concretely in the lives of her characters.
One of the most vivid stories (and one that is most obliquely but graphically related to legend) is by Brian McGilloway, featuring his series character, Ben Devlin, in pursuit of a murdering fish poacher. The story has a neat punch in the last line. I’ve just finished McGilloway’s most recent Devlin novel, The Rising, which has a similar last-line punch, and will be posting about that soon.
Though I was a bit dubious about the overarching theme when I first received this book (as an advance pdf copy graciously sent by Gerard Brennan), the collection fulfils all the requirements of crime fiction (even noir fiction) as well as providing interesting glosses on the myths evoked. The theme, in fact, gives an unusual coherence sometimes lacking in crime collections with a geographic hook, and gives a glimpse not only into the work of writers whose work I did not know, but also a further glimpse into the talents of those I was already familar with. Highly recommended.
Posted by Glenn Harper at 12:46 PM