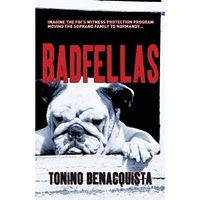 Badfellas (originally titled Malavita) translated from the French by Emily Read and published by Bitter Lemon, is the fourth of Tonino Benacquista's neo-noir comic novels to make it into English. It's a funny book, transplanting a Sopranos-like family into rural Normandy by means of the Witness Protection Program, and each family member accommodates to the new environment in his or her unique way (perhaps the funniest part of the book). There are some very French jokes (for instance, the school where the son and daughter are enrolled is called the Jules Vallès Lycée--Vallès is famous in France, and not so much outside it, as the 19th-century author of a very funny autobiographical book about a boy who is bored and abused in school, as well as at home, translated recently as The Child), as well as, I'm sure, many others that I didn't get.

The structure of the book is a bit disconnected. Imagine the memoir-in-progress of a gangster, destroyed in a conflagration; scraps of the text saved and pasted together with text by someone else, and then, post-fire, finished by the gangster. That's not the premise of the book, but it's how it's constructed. Each family member gets a turn in the limelight, giving a somewhat episodic quality to the book. There's also the comic saga of the school newspaper that travels around the world and ultimately gives the New Jersey Mob a clue as to the whereabouts of the family (a bounty on their head because of the father's testimony, extracted in exchange for his quasi-freedom in Witness Protection). And then there's the family dog, Malavita, who is not the bulldog featured on the U.S. cover...

And the final, Western-style duel between the family, their FBI protectors, and the Mob hit men sent to kill them is a bit distanced, as if seen through smoked glass. The mobsters memoir takes over, and he relates the incidents from memory, almost as if at second hand, removing some of the violence to a safe distance but also muffling the effect a bit--though to give the author full credit, it's really the mobster's voice that's the heart of the book, not the battle.

Like Rob in his review (at http://theviewfromthebluehouse.blogspot.com/), I found some things in the plot to quibble about, but I enjoyed Badfellas (and look forward to the possible translation of Malavita encore, which is apparently a sequel). It's not as funny as his first book, Holy Smoke, nor as noir as his other two already translated, Framed and Someone Else, but it's a more expansive story (traveling around the world with the school paper, importing the American Mafia to Normandy, satirizing the residents of the town, etc.) and is an enjoyable book in its own right.
Posted by Glenn Harper at 8:33 AM

Great review, as ever, and thank you for the explanation about the name of the school - I had not picked that up when I read it.